Retired doctors Philllip and Carol Teitlebaum got the Catawba Island Historical Society’s sponsorship program off to a healthy start.

After purchasing a summer residence here 20 years ago, the Teitlebaums frequently visited The Ottawa City General Store on Catawba Island. This sparked their interest in local history and a friendship with store owners Don and JoAnn Rhodes.

The majority of artifacts now at the Union Chapel Museum were collected by Don Rhodes and had been displayed at the Ottawa City General Store until it closed in 2016. Rhodes subsequently gifted the unique items to the Historical Society.

When the Museum opens for the 2019 season in mid-May, they will be arranged to take visitors on a journey from Catawba’s geological birth through its current prominence as a recreational Mecca and sportsman’s paradise.

“Patrons with a serious interest in preserving the area’s heritage can sponsor one of the prominent display areas on the Museum gallery’s side walls,” said Phillip Teitlebaum.  “They call these locations Windows in Time because the information presented in each offers an intriguing view of a bygone era. Carol and I would like to be remembered for helping keep those memories alive.”

President Craig Koerpel of the Historical Society noted that several inquiries had been received about naming rights and sponsorship opportunities at the museum which first opened its doors last June.

“We established the Windows in Time program so people like the Teitlebaums could leave an enduring legacy for future generations,” he said. “Their names will now be forever etched in the Catawba Island story.”

Nine of 10 original Windows in Time locations remain following the Teitlebaum selection.  Each will be permanently identified by a commemorative bronze plaque bearing the names of sponsors or sponsor designees. The total cost per commemorative opportunity is $10,000 payable in installments over four consecutive years.

“We were lucky to get an advance peek at the 2019 exhibits and were truly impressed with the museum’s pending displays,” noted Carol Teitlebaum. “Word of the job they are doing will spread quickly once the doors officially open in May.  I suspect the few remaining Windows in Time locations will then be quickly sponsored by others who love and appreciate the history of this area as much as we do.”

More information about the Catawba Island Historical Society and the Catawba Museum at Union Chapel is available on line at www.catawbaislandhistoricalsociety.com, or by calling 419 967 5363 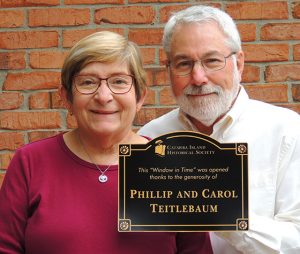