Kristy Malacos, Executive Director of Ancillary Services at Magruder Hospital, was the speaker at the Port Clinton Kiwanis Club “Zoom” meeting last Wednesday. Her topic was the “soon to arrive” COVID-19 vaccines from Pfizer and Moderna. Shipment of the vaccines to Ohio hospitals began in mid-December. Both are administered as two injections and are not interchangeable. Full immunity takes approximately two weeks after the second injection. Magruder Hospital will soon be starting the next phase which includes folks 65 and older. The first phase, which includes local healthcare workers, and first responders, is nearly complete.

As of Friday Jan. 8, Ottawa County has had a total of 2,610 confirmed or probable cases of COVID-19 since the pandemic began last February. The number of deaths attributed to the virus remains at 34. Also, the Ottawa County Health Department has been involved in the first phase of administering the vaccine to health workers, first responders as well as group homes and congregate living facilities. They have already received several hundred calls. When they move to the next phase, they will be scheduling clinics across the County.

Sandy Giangrande of Port Clinton was chosen from among 102 entries who found Wylie hiding in the ad for St. Boniface Bingo on Page 5A in last week’s Beacon. So, congratulations Sandy. You are the winner of our weekly $25 gas card graciously donated by Friendship Stores. Each week we hide Wylie Walleye in an ad and our readers, when one of them finds him, can either bring in a contest entry cut out of the paper or log onto our website … www.thebeacon.net … and let us know where he is, thus entering, and possibly winning our weekly contest.

Wow! Given all that has gone on this entire year, how in the world did Salvation Army pull it off? With only 42,000 people in Ottawa County, getting over $60,000 is pretty good. Topping $100,000 Is simply amazing. Congratulations to Mo Saponari and her army of volunteers!

Also, thank you to all of those who made donations in this time of such enormous need. 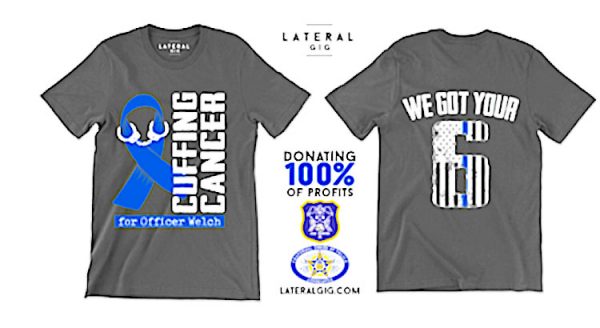 The Fraternal Order of Police and Oak Harbor High School’s DECA are teaming up to sponsor the Cuffing for Officer Loren Welch benefit event. Welch was injured recently during a high-speed chase, and medical officials discovered he was also suffering from Non-Hodgkins Lymphoma and has begun chemotherapy.

DECA is assisting with ticket sales, t-shirt sales, and collecting donations for an online auction. T-shirts have been created for the event and will be sold online until 3 p.m. on Thursday, Jan. 14 at https://forms.gle/DkMF6K2u5zXPiKa98 T-shirts (pictured above) cost $24.99. For those who don’t know, the back is code for We’ve got your Back.

Gail McKee, known best as “Grandma” in the Port Clinton City Schools kitchen over the past decade, and who enjoyed helping to transform the cafeteria into the Spooktacular each year, has retired. During her time as a server, said school officials, Gail has served about 650,000 school meals.

The Oak Harbor Area Chamber of Commerce’s 2021 Annual Meeting will be held virtually via Zoom on Wednesday Jan. 27, at 12 p.m. They will provide a recap of 2020, a look ahead at 2021 and Village of Oak Harbor Mayor Quinton Babcock will provide updates on local projects. All attendees will be entered to win a grand prize.

Good Neighbor Award . . . Dee Kohntopp was walking her dog in her neighborhood off Rt. 269 near East Harbor State Park. She noted an excessive amount of chimney smoke coming out of one of her neighbor’s homes, but it looked like nobody was home. So she called 911 and the Danbury Volunteer Fire Department responded. It was indeed a chimney fire and the owner of the home was at work. Dee Kohntopp saved her neighbors home.