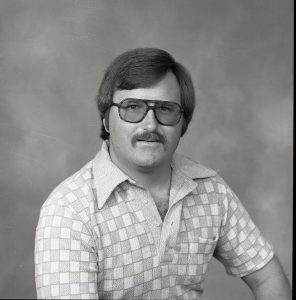 Al Riznikove and his wife Carol moved to Port Clinton in the mid 1970s and opened Focus Point Studios. Al passed away earlier this month after a long battle with Alzheimer’s. There are very few young men and ladies who weren’t touched by Al’s creative photography skills and taking senior pictures was his specialty.

But Al did way more than just senior high school students. He was a regular on the sidelines at True-Lay Stadium on Friday nights taking pictures for the Revista. Anybody who was privileged to attend one of Tom Maher’s end-of-year DECA banquets had to be totally impressed with his ability to up together incredible slide shows of the PCHS students for that year.
Al was a community contributor to the max and he will be missed. The photo above my column this week was taken by Al in 1975 as part of taking pictures of the entire WRWR staff.

Another loss to the community happened last week with the passing of Sue Herzog. I first met Sue when she was the secretary/receptionist for Gary Coon at Edward Jones. She was friendly, efficient and helpful. According to her husband Horst, she was diagnosed with pancreatic cancer at the end of January, and passed away 10 days later. I will miss her too.

Linda Driscoll is the winner this week in our “Find Wylie” contest. Linda was chosen from among 89 entries who found Wylie hiding in the ad for Genoa Bank on Page 6B in last week’s Beacon. So, Linda wins our weekly $25 gas card graciously donated by Friendship Stores. Each week we hide Wylie Walleye in an ad and our readers, when one of them finds him, can either bring in a contest entry cut out of the paper or log onto our website … www.thebeacon.net … and let us know where he is, thus entering, and possibly winning our weekly contest.

Mary Alice and I spent the first two weeks of February in Florida. We spent four days in Englewood with her brother and sister in law, Dick and Judy (Derivan) Kollman; three days in Clearwater at a Newspaper Publishers’ Summit; then a week near Pensacola visiting Jeff and Kendra Koehler, owners of the Put-in-Bay Gazette.

Unfortunately, Kendra was not there due to the passing of her mom, who lived on Catawba. We did get to spend time with Mark and Mary Meyers, Barb Hunter, Dale and Debbie Larcey and Barb Chrysler, who were all from the Island. Came home Sunday, which is why the sun came out.

A special Chili Cook-Off and other chili events will be held this Saturday, Feb 22, at the Ottawa National Wildlife Refuge off State Rt. 2 about 10 miles west of Port Clinton. There will be wildlife tours and lots of warming chili for the event. The event runs from 11 a.m. to 2 p.m.

Oak Harbor High School Art Club is sponsoring Community Clay Night Thursday, Feb. 20 from 5-6 p.m. The cost will be $15 and any age is welcome. Participants will come to the art room for this family-friendly opportunity (Room 609) and have the opportunity to glaze/paint ceramic pieces created by high school art students with handprints, designs, or a solid color. Glazed ceramic pieces will be available to pick up after school on March 6. For questions or to RSVP please contact Mrs. Gilbert at egilbert@bcssd.com. Spaces are limited.

Playmakers Civic Theater will perform “Old Ringers, for a Good Time Call …” this Friday-Sunday at their Sixth Street Theater. Shows are at 8 p.m. and a 2 p.m. matinee on Sunday.

Tickets are still on sale for the Marblehead Purse Bingo event on Saturday, March 7 at Danbury School. The event is hosted by the Marblehead Peninsula Chamber of Commerce and the Danbury Parent Teacher Organization. 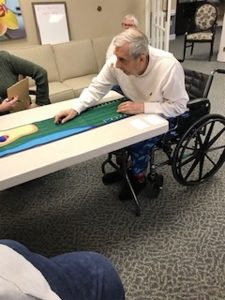 The Otterbein campus in Marblehead is competing against other Otterbein campus locations across the state. Also, the Alzheimer’s Association of Northwest Ohio will hold an educational program on the 10 warning signs of the disease at 1 p.m. on Thursday, March 5 at the Otterbein campus, 9400 North Shore Rd., Marblehead. You can register online at alz.org/CRE or call 1-800-272-3900.

Magruder Hospital’s monthly Cancer Support Group will be held next Wednesday, Feb. 26 at 12:30 p.m. in the Conference Center. This support group is for anyone who has been impacted by cancer. There is a complementary light lunch provided so RSVP to 419-301-4371 by next Monday, Feb. 24.