Based on my view of local traffic, it looks as though things are starting to get back to normal. Just please remember the true meaning of the Monday holiday . . . to recognize and remember the sacrifices made by the men and women of the armed forces, particularly those who gave the ultimate sacrifice, paying for our freedoms with their lives.

I attended a graduation party on Saturday afternoon for Michael Recker, son of Lisa and Jim Recker. I was surprised to learn that Port Clinton High School graduated 139 on Saturday. My class of 1967 graduated 289! That is more than double the number of grads in just 54 years. The PCHS Alumni Association, along with 1964 Student Council President Malcolm McNiel, are planning another “All Class Reunion” for this coming September, so stay tuned for details.

Pam Marsh of Marblehead was selected from among 130 entries who found Wylie hiding in the ad for The Walleye Festival on Page 3A in last week’s Beacon. So, congratulations Pam. She is the winner of our weekly $25 gas card graciously donated by Friendship Stores.

Playmakers Civic Theatre won’t open its doors for a stage production until the Christmastime musical in December, but the popular group does need some help until then. There’s a bit of a cash crunch, and Playmakers will try to help solve it with a big Flea Market on Friday and Saturday, June 4-5 from 8:30 a.m. to 3:30 p.m.

Hundreds of items have already been donated for the Flea Market at Playmakers Civic Theatre, 604 W. Sixth St., Port Clinton, just west of the Port Clinton’s Bassett’s Stadium. Master Card and Visa will be accepted on purchases of $25 or more. The profits will help to pay the theatre’s bills, and fund new furnaces.

The Oak Harbor Area Memorial Day Religious Services will be held at St. Paul’s United Church of Christ on Sunday, May 30 at 9:30 a.m. Then on Monday (Memorial Day) a breakfast will be served from 6:30 to 8:30 a.m. at the American Legion Post with all local veterans and their families invited, followed by the American Legion Service at 9 a.m. at Limestone Cemetery. The VFW will hold memorial services at Frenchtown Cemetery at 8:45 a.m., Locust Point Cemetery at 9:05, Rushau Cemetery at 9:30 and Roose Cemetery at 9:55. The annual Memorial Day Parade at 11 a.m. in front of Oak Harbor Middle School. A brief ceremony will be held at Flat Iron Park and the Bayou Bridge (for veterans lost at sea). The parade will then head to the Veterans Memorial Circle in Union Cemetery for the final service of the day. 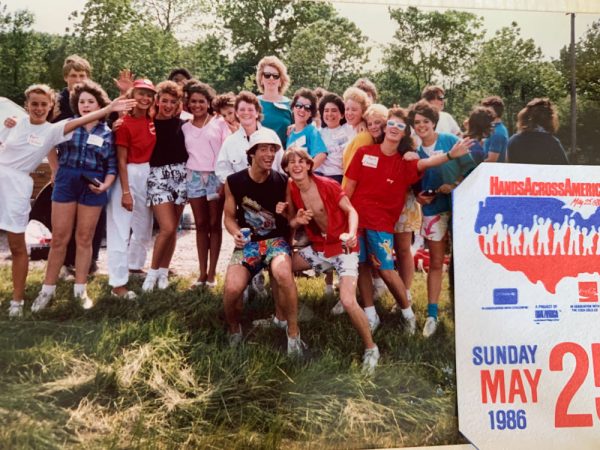 May 25, 1986, was an historical day for many 9th graders in Ms. Kathy Jo Schweitzer’s Port Clinton High School English classes. It was a day when over 60 students joined hands in Fremont, as part of the worldwide chain, HANDS ACROSS AMERICA. The 15-minute event, covering 4,152 miles, was designed to bring help to America’s hungry and homeless. They were estimated to be an astonishing 4.9 million strong, a cross-country line of Americans, whose number exceeded the population of 35 of the nation’s states.

With the help of the PCCS bus drivers, the day was a huge success and a memory that will be held forever, including the bus ride to and from the event!

The date of the Put-in-Bay Music Festival has been changed from Saturday, June 5 to Saturday, Sept. 18. The plans are to still offer bluegrass, folk, rhythm and blues, pop and zydeco at the free all-day concert, but officials are moving the music fest to a new location.

The 5th annual Put-in-Bay Music Festival will be held on the grounds of the Boathouse Bar & Grill, 218 Hartford Ave., in downtown Put-in-Bay. The event will begin at 11 a.m. and last all day, so bring a blanket and lawn chair. Food trucks will be on site.

The big winner in the recent Cabela’s Masters Walleye Circuit and Lake Erie Walleye Trail fishing tournaments on Lake Erie at Port Clinton was the Victory Kitchen in Sandusky. The Victory Temple soup kitchen was given all of the walleye weighed in over two days by the 109 two-angler pro teams, since Ohio Division of Wildlife rules don’t allow the walleye to be released back into Lake Erie. According to tournament officials, the 109 teams weighed in 1,160 walleye, a load that totaled 5,615 pounds.

The MOM Areas in downtown Port Clinton — the Meals on Madison and Music on Madison — will kick in with plenty of music this weekend. Add the Walleye Festival music schedule on Thursday through Monday, and there will be a plethora of talent for visitors and residents to enjoy.

Hat’s off to Judi Halstead of Integrity Productions for putting together a wonderful schedule of bands for the RiverFront Live! Shows on Friday nights starting Friday, June 4, with Jai Merina, a young lady who has been getting rave reviews at a variety of local venues. All of the RiverFront Live! Shows start at 6 p.m., followed by the MOM Entertainment Stage acts at 8 p.m.

With so much entertainment coming to Ottawa County this summer and fall, be sure to check out the Summer on the Lake section of The Beacon each week for the Live Entertainment listings. We’ll fill you in on who’s playing where from the MOM Entertainment Stage and all of the local pubs and taverns. If your band  or venue isn’t listed, contact The Beacon at editor@thebeacon.net.

Ottawa County Community Blood Drive and the American Red Cross are hosting an upcoming blood drive at the Holiday Inn Express, just north of the Catawba Causeway on SR 53 Tuesday, June 8 from 10:30 a.m. to 4:30 p.m. Also, On June 29 the Port Clinton Knights of Columbus is teaming up with the American Red Cross to sponsor a blood drive. This event will take place at the Denny Bergeman Hall, 109 E. Perry St., Port Clinton, between 12 noon and 6pm. Those interested in donating blood can call 1-800-RED-CROSS for an appointment. Walk-ins are also welcome but those with appointments will be honored first.