In the early days of my career here, I met a young lady who just joined the faculty of Port Clinton High School as a Phys. Ed. teacher. Her name was Ida Basco. I could tell right away she was good people. She married Bob Hahn, the pastor at Trinity Methodist Church. Ida passed away last Sunday after a long battle with Cancer. After her teaching career, she became a community volunteer in a whole host of areas. Her energy seemed to be boundless. A couple of weeks ago, her friends (and they were numerous) staged a parade past her house while she was stuck inside with the pandemic lockdown. She will be sorely missed.

Friday night, we gave the new restaurant, The Que a try, and we were absolutely not disappointed. The service was good, the food was even better and the prices were quite reasonable.

Dori Kubinski of Catawba was chosen from among 134 entries who found Wylie in the ad for Ciao Bella on Page 4C in last week’s Beacon. So, Dori wins our weekly $25 gas card graciously donated by Friendship Stores. Each week we hide Wylie Walleye in an ad and our readers, when one of them finds him, can either bring in a contest entry cut out of the paper or log onto our website … www.thebeacon.net … and let us know where he is, thus entering, and possibly winning our weekly contest.

I spoke last week with Port Clinton Mayor Mike Snider, and he informed me the decision has been made to extend the “MOMS” program (Meals on Madison) through October, which means the 100 block of Madison Street will be blocked off and the picnic tables will stay put. It has been a tremendous success so far.

Speaking of MOMS, local singer/songwriter Dr. John Davenport. Davenport is a native of Port Clinton and currently resides on Catawba Island with his wife, Dr. Diana Kyrkos. John is a retired USAF Lt. Col. and a decorated military aviator with over 13,000 flying hours. He even spent time for two years ago as a jet pilot, supporting the Cleveland Clinic’s organ transplant program.  His favorite job, however, is entertaining, especially when someone asks for one of his own songs, and he will be featured on Friday at 6 p.m. at the MOMS area.

The Catawba Island Volunteer Fireman’s Association held a vote recently and reluctantly decided to suspend their annual chicken BBQ fundraiser that takes places mid-July each year. At the meeting, the association discussed multiple options to modify the event, including offering only drive-through service, but ultimately decided to forgo the fundraiser amid concerns of the potential spread of COVID-19 among guests, community members and department personnel. 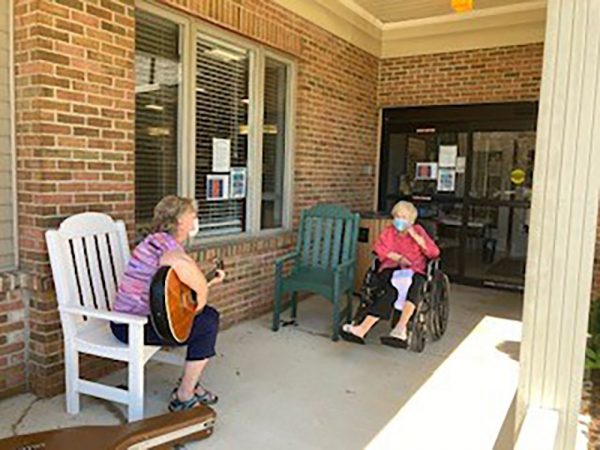 Otterbein resident Marie Bowman is enjoying the sunshine, company and music provided by her daughter Jeri.

Emily Schiller of Oak Harbor was among the more than 8,500 undergraduate students at the University of Iowa named to the dean’s list for the 2020 spring semester. And finally, Bryanna Barr, Biology major from Port Clinton, was named to the Dean’s List at Saint Francis University in Pennsylvania.