On a very sad note, we’re sorry to report the passing of former Port Clinton Mayor Tom Brown. He was a guidance counselor at Port Clinton High School for so many years and was known for getting appointments to one of the Military Academies approved.

Mayor Brown was girls basketball coach for many years. He was instrumental in the beginning years of the New Year’s Eve Walleye Drop, helping to make that event the success that it is today. Before becoming Mayor, he served several terms on City Council.

Brown fought a long battle with Parkinson’s Disease. Our thoughts and prayers are with his wife, Helen, and the Brown family. 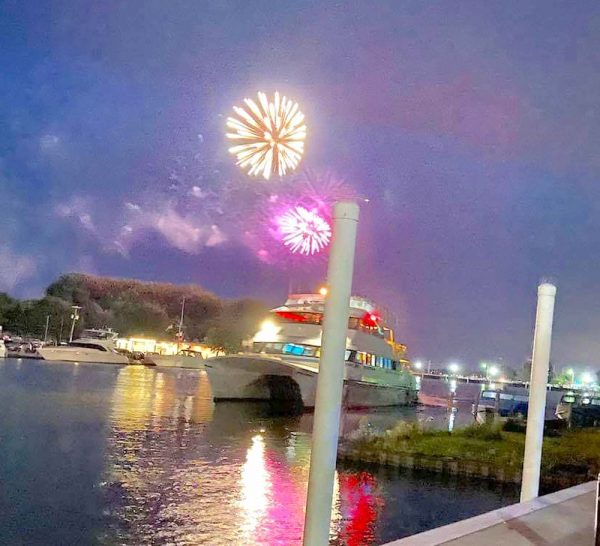 The Portage River and Port Clinton are colorful places to be on the Fourth of July. This photograph of fireworks and the well-lit Jet Express during the Independence Day festivities were courtesy of Karen Raypole Moffett

The much anticipated dedication of the Portage River Water Trail from Port Clinton to Pemberville will be held at 11 a.m. on Tuesday, July 19 in Oak Harbor at the Interurban Overlook Launch at the intersection of Church and Mill streets. The Portage River is a popular location for recreational activities such as kayaking, boating, canoeing and fishing.

The new Portage River Water Trail offers signage showing access locations and facilities available along the river. Following remarks from Ohio Department of Natural Resources Director Mary Mertz and local officials involved with the project, the event will include an opportunity to participate in an optional float on the Portage River. To learn more about Ohio’s water trails program, go to ohiodnr.gov/discover-and-learn/land-water/rivers-streams-wetlands/ohio-water-trails

Images from the James Webb Telescope, recently launched into space to replace the Hubble Telescope, will be released this week. Major components of this amazing project were developed and built at Materion, east of Elmore.

Lori Gruber was selected from among 175 entries who found Wylie Walleye hiding in the ad for Ida Rupp Public Library on Page 1B in last week’s Beacon. So, Lori wins our weekly $25 gas card graciously donated by Friendship Stores.

Each week we hide Wylie in an ad for our readers to find. When one does, they can log onto our website, www.thebeacon.net and let us know where he is!

Also, Wylie Walleye is eager to answer our community’s questions, keep sending them in to P.O. Box 176 or emailing them to askwylie@thebeacon.net. He has a wonderful time swimming around Lake Erie Shores here in Ottawa County getting information for you all.

Don’t forget about Memory Lane, featuring historical photographs of our area. If you’d like to submit your own, please send them with a written explanation to memories@thebeacon.net or mail to P.O. Box 176.

The Beacon has always been residential delivery, with fuel prices as they are we are doing a research of the area on who wants the paper and who does not. Please take the time to cut out the subscription form on page 6B this week and mail it back to The Beacon, P.O. Box 176, Port Clintion, OH 43452. We would greatly appreciate it.

“The Matthews Family 1906 Voyage, 9,000 Miles Onboard the ONWARD” will be featured at Lakeside’s Orchestra Hall on Friday, July 15 at 10:30 a.m., including a Q&A with Bob Reynolds of Port Clinton. Reynolds is the grandson of Scott Matthews, founder of the Matthews Boat Company and a previous visitor to Hotel Lakeside, where he spent his honeymoon in 1897.

Using original photographs and written accounts, the documentary chronicles the adventures of Scott Matthews’ 70-foot yacht, the ONWARD as it traversed the eastern half of the United States and completed what is now known as the “Great Loop” in 1906. The first private yacht to make this 9,000-mile trip, the ONWARD’s success resulted in the move of Matthews Boat Company to Port Clinton, said Kaysie M. Harrington, Archivist & Manager of Operations.

Rose Sabin of Root to Rise Wellness Cafe in Port Clinton and local balladeer John Davenport of Catawba will team up for a Drum Circle on Sunday, July 17 at South Bass Island’s Massie Preserve at 6:30 p.m. Bring a folding chair, bug spray and a handmade drum to join in. Sabin will have samples of snacks from her cafe.

Drum circles are centuries old and held around the world. They are considered a conduit of energy, bringing body, mind and soul back into harmony. Share the beat and get into tune! The event benefits the Lake Erie Islands Nature & Wildlife Center.

“The Ottawa County Genealogical Society meeting will be Friday, July 22 at Toledo Lucas County Public Library, 325 N Michigan Street, Toledo. This is the society’s yearly field trip. The group will meet in the lobby at 10 a.m. Afterwards, they’re planning to gather fort lunch. The lunch location hasn’t been decided yet. The public is welcome to join them, said Ottawa County Genealogical Society officials.

This 58th annual Ottawa County Fair opens on Monday, July 18 at the Oak Harbor fairgrounds, and thanks to a very hard-working fair board, this year’s exposition will be the most affordable ever for families attending. There will be one price for the kids, a $6 entry that includes free rides on all the inflatable and mechanical rides this year.

With sponsorship from Magruder Hospital, there will be free admission for everyone on Sunday, July 24, and that includes the free rides!

Be sure to visit the fair on Tuesday, July 19 at 1 p.m. for the dedication of the Genoa Bank Pavilion, and the debut of the new ice cream booth brought about by Genoa Bank’s sponsorship. There will be lots of new vendors and food venues this year, as well.

The harness races will kick off county fair fun on Monday and Tuesday at 5 p.m. Get your bets down on the trotters and pacers!

Nationally recognized as one of the most outstanding undergraduate institutions, Miami University is a public university located in Oxford, Ohio. With a student body of nearly 19,000, Miami effectively combines a wide range of strong academic programs with faculty who love to teach and the personal attention ordinarily found only at much smaller institutions.