As organizers of the 2-day music festival Rock the Light, Main Street Port Clinton has been closely monitoring the ever-evolving COVID-19 pandemic. Based on the high degree of uncertainty about what the coming months will hold, and after consulting their partners at The Listening Room, the Main Street Board of Directors and city officials; and in the best interest of the general public, volunteers, vendors, and entertainment, they have made the decision to cancel Rock the Light for 2020.

We learned this week that the Board of Trustees of the Inter-Lake Yachting Association has voted to cancel the 2020 power and sail regattas. This has been an exceedingly difficult summer for Put-in-Bay and the Islands. This Saturday is July 25, the perfect “Christmas in July” date. There has been trouble in recent years for this particular celebration, and the Island businesses have kind of tamped it down.

Brian Jacobs of Sagamore Hills was chosen from among 161 entries who found Wylie in the ad for Bassett’s Market on Page 3A in last week’s Beacon. So, Brian wins our weekly $25 gas card graciously donated by Friendship Stores. Each week we hide Wylie Walleye in an ad and our readers, when one of them finds him, can either bring in a contest entry cut out of the paper or log onto our website … www.thebeacon.net … and let us know where he is, thus entering, and possibly winning our weekly contest.

Shortly before she died suddenly recently, Joy Roth caught up with Interim Director Alison Lanza Falls of United Way of Ottawa County to make sure she had her tickets for UWOC’s Incredible Rubber Duck Race on Saturday, Aug. 1 at 8 p.m. at Derby Pond in Waterworks Park. For the founder of the Ottawa County Community Foundation, which has given millions to worthy causes over the years, it was typical of Roth’s generosity to local charities and fundraising events.

“Not only did United Way of Ottawa County make sure Joy had a duck to root for during the race, we issued her Duck No. 1 from among the thousand of little yellow floaters,” said Falls.

Port Clinton Mayor Mike Snider has made social distancing a big part of the “Time to Rewind” celebration on Saturday, Aug. 1 in downtown Port Clinton. The fireworks show at 10 p.m. at Waterworks Park is a good example. The best place to view the show will be anywhere along Perry Street, or along the beach at Waterworks Park. The fireworks will blast off a couple of hundred feet west of the Marblehead Lighthouse.

The Jefferson Street renovation is going well in Port Clinton, but city crews were a bit surprised when they began installing a water pump along the Portage River. They unearthed a lot of fill from many decades ago placed along the river, including glass bottles and other materials from a bygone era. The workers stored the items at the city garage so Curator Peggy Debien of the Ottawa County Museum can check them out.

The Port Clinton City Council meetings are moving to the Shelter House at Lakeview Park, 1100 E. Perry Street starting on Tuesday, July 28 at 7:30 p.m. They had been holding the meetings outside at City Hall, to encourage social distancing, but train, traffic noise and the many birds in the area were quite disconcerting. Everyone can now watch government in action, with Lake Erie in the background, on the second and fourth Tuesdays of the month.

The Meals on Madison (M.O.M.) area is getting rave reviews, with other cities checking out Port Clinton’s good idea of utilizing downtown space for music and entertainment. Local merchants report the foot traffic and retail sales in the downtown area have been very good. Today (Thursday, July 23) the Greater Port Clinton Area Arts Council will have its first Art Walk from 5-8 p.m., featuring nine artists spread around the area.

Look for more seating at the M.O.M. area taking over the 100 Block of Madison Street. A variety of donors have provided new picnic benches and tables for the area, all positioned at least 6 feet from one another for social distancing. Riverfront Live! will feature John Pickle on the M.O.M stage on Friday at 6 p.m. Bring folding chairs.

Miami University in Oxford, Ohio awarded degrees to students during its virtual spring commencement experience in May. Steven Kast of Port Clinton, and Gina Moravec of Marblehead were among the graduates. Congratulations. 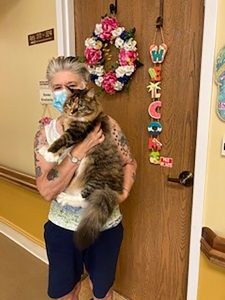