It was an amazing weekend in Port Clinton. At several junctures on Friday, Saturday and Sunday evenings, there were five bands playing outside within an eighth of a mile of each other downtown . . . and all venues were packed.

M.O.M. had great crowds, as did the Perch, Peach, Pierogi Festival at the Denny Bergeman Knights of Columbus Hall. There was also live music going down at Port Clinton Yacht Club, The Gristmill and The Bait House. 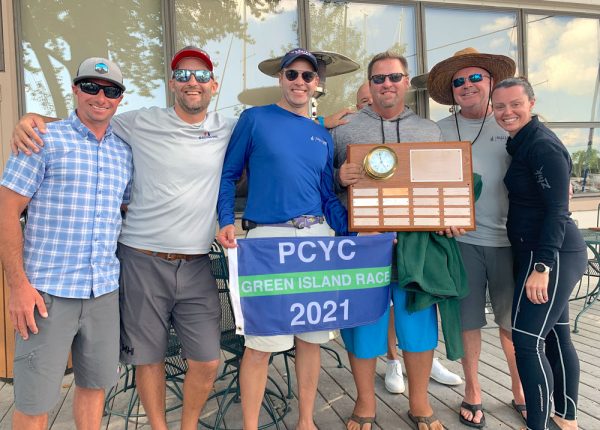 A number of local skippers, as well as skippers with a Port Clinton heritage, did very well in Sunday’s Annual Green Island Race at Port Clinton Yacht Club. Congratulations to Chip Schaffner (PCHS Class of ’88) and his crew (which included Chip Bodie, PCHS Class of ’84, who won the coveted Green Jacket for First Overall). That’s Chip holding the Green Island Race Trophy in the photo.

Mark Springer and his crew won the Green Island Trophy for first place among the PCYC boats entered, along with first place in the J-24 class. Wes Blazer, owner of Weatherly Boats on Buckeye Boulevard took first in Class C and 3rd Overall. Jim Miller and grandson J.J. took second in Class C, while Yours Truly, along with PCHS Alumni Tim and Todd Willford, took third in Class C.

Bill Jilek of Port Clinton was selected from among 181 entries who found Wylie hiding in the ad for the Howard Hanna on Page 1B in last week’s Beacon. So, congratulations to Bill, the winner of our weekly $25 gas card graciously donated by Friendship Stores.

Attention all Port Clinton High School Alumni! Every three years, the Alumni Association, with a big assist from Class of 1963 Student Council President Malcolm McNeil, who lives in California now, put on an “All-Class Reunion” with activities lasting three days! This is the year! Numerous events are planned for the weekend of Sept. 23-26. I had a great time with this event in 2018 and expect it will be a great time again later this month.

The Kiwanis Club of Port Clinton will be celebrating its 100th Anniversary of service on Thursday, Sept. 23 at Gideon Owen on Catawba. A significant number of dignitaries will be in attendance, including current Ohio District Governor Jamie Kaufman, who began his career in Kiwanis as a member of the Port Clinton High School Key Club!

I recently learned that the Bailey family had an amazing experience this summer. Both father Geoff and daughter Erika managed a hole in one within weeks of each other. Erika, who teaches third grade in Ypsilanti, Mich., got hers at Ottawa Park in Toledo, while Geoff got his on the 15th hole at Thunderbird South in Huron.

Trinity United Methodist Church in Port Clinton, under the leadership of Pastor Warren Brown, is planning a return to in-church services this fall. Beginning Sunday, Sept. 19, services will be held in their sanctuary on Adams Street at 10:30 a.m. Trinity has been sharing open air services with the community at Sutton Center since spring. These summer “come-as-you-are, worship-in-your-car” services have been enjoyed by members and friends of Trinity since 1962.

This summer Trinity United Methodist has worshipped with about 100 people each Sunday. Trinity officials hope all who have attended will now join them in their sanctuary each Sunday at 10:30 a.m.

The Port Clinton Lions Club will hold its “Fall into Autumn” BBQ Ribs Dinner this Sunday, Sept. 12, at the Denny Bergeman Knights of Columbus Hall, 121 E Perry St., Downtown Port Clinton. They will be serving from 11 a.m. to 1 p.m. Dinner includes Ribs, baked potato, cole slaw, roll and butter, and a bottle of water. Tickets $15. It is CARRY OUT ONLY!

A tragic accident during the Bash on the Bay country concert last week at the Put-in-Bay Airport claimed the life of star Keith Urban’s production manager, Randy “Baja” Fletcher. The 72-year-old, who had toured for some of the top bands for about 50 years, including over the last decade with Urban, was injured when he fell from the Put-in-Bay stage on Thursday, Aug. 26. Fletcher was rushed to a mainland hospital in a LifeFlight helicopter, where he died on Friday, according to Billboard magazine.

The highly-praised “Eddie Adams: Vietnam” exhibit at The Arts Garage in Port Clinton will continue its run through Sunday, Nov. 14. The very moving installation of famed war photographer Eddie Adams black-and-white images, complete with historical artifacts and uniforms, was a wonderful way for the Greater Port Clinton Area Art Council to open the arts facility. The exhibition is free, and all are invited. Gallery hours are Wednesday through Friday from 10 a.m.-4 p.m.; Thursday from 10 a.m.-7 p.m.; and Saturday and Sunday from 10 a.m.-2 p.m. The GPCAAC need volunteers to help monitor the gallery. Contact Exhibit Chair Barbara Radebaugh at radstar47@aol.com. 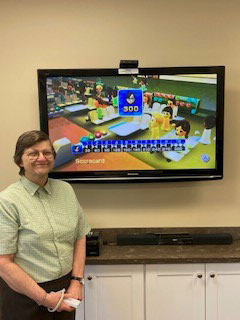