It has been very hard to ignore that the Western Basin of Lake Erie is dealing with record high Lake Erie water levels. It was the highest on record during the month of May, the highest since the previous record was set in 1986, according to the U.S. Army Corps of Engineers. Flooding has been common in downtown Port Clinton, and a major portion of the Port Clinton City Beach has been cordoned off.
However, there is good news. The U.S. Army Corps of Engineers predicts Lake Erie will finally begin to drop a couple of inches by July 1.

It’s a big weekend at Put-in-Bay. As we reported previously, there will be a gathering of kayak enthusiasts there all weekend. Saturday is the Put-in-Bay Music Festival starting at noon at the monument. Finally, Friday night is the start of the Mills Trophy yacht race that finishes in the wee hours of Saturday morning.

Carey Puruczky of Kirtland, Ohio is our winner this week in our “Find Wylie” contest. He was chosen from among 86 entries who successfully found our friendly fish hiding in the ad for Genoa Bank on page 2B in last week’s Beacon. Carey wins a $25 gas card graciously donated by Friendship Stores. Each week we hide Wylie Walleye in an ad and our readers, when one of them finds him, can either bring in a contest entry cut out of the paper or log onto our website … www.thebeacon.net … and let us know where he is, thus entering, and possibly winning the contest.

The 30th Annual Materion Chick Schaffner Memorial Charity Golf Classic is scheduled for Monday, June 24 at the CIC golf course. It’s a 4-person scramble benefitting Stein Hospice and the American Heart Association, so get your team together. To register as a team or hole sponsor, visit schaffnergolfcharity.com; Daniel.Franks@Materion.com or sbrossia@steinhospice.org.

This coming Fourth of July will be the 50th Anniversary of the incredible storm of 1969 that hit just around dusk on that day. It caused huge damage across the area and we would like to do a story on it for our July 4th of issue. If anyone has any photos from that storm, please send them to us or bring them into our office next to Goodwill in Port Clinton. We would love to share them.

Old friend David Zavagno, architect of the “Battle of Lake Erie” celebration in 2013, has a new historical event to commemorate. David is putting together a statewide celebration of the first Moon landing, and the first man to walk on the moon, Ohioan Neil Armstrong. There will be hundreds of observances on July 20 and David is encouraging folks to hold “Splashdown Parties.” Maybe that could replace Christmas in July at the Bay this year.
The 10th Annual Fabulous Flea Market, artists and crafters show, sponsored by the Church of Truth Ministries, 3260 East State Rd. (the old Gypsum grade school) will be held on Saturday, June 15 from 9 a.m. to 3 p.m.

The Port Clinton Friends of the Cemeteries is holding as raffle-fundraiser. 1st prize is a 6-person fishing charter courtesy of Sea Breeze Charters. 2nd Prize is 4 tickets to Cedar Point and 3rd prize is a one-night stay at Our Guest Inn & Suites plus a $50 certificate to Rosie’s Bar and Grill. Tickets are $5 each or 5 for $20 and can be had by calling 419-732-3074. 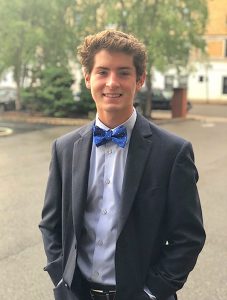 Avery Hines, a junior at Port Clinton High School will be a delegate to the Congress of Future Medical Leaders in Lowell, Mass., on June 23-25.
Michael Lay of Port Clinton was among some 850 graduates at Michigan Tech in Houghton, Mich. on May 4. Michael attained a Bachelor’s degree in Software Engineering.
Finally, Callaway Lynne Sprouse of Port Clinton graduated with a Bachelor of Business Administration from the University of Mississippi on May 11.

Magruder Hospital will host the monthly Alzheimer’s Support Group on Monday, June 10 at 9 a.m. in the Conference Center. Meeting on the second Monday of each month, the group provides helpful tips, education, encouragement and resources to family, friends and caregivers of anyone dealing with dementia and memory loss.
Magruder Hospital will offer their monthly screening on the second Thursday of every month starting at 9 a.m. in the lab. The test is a venipuncture/blood draw rather than a finger stick, and will include a Basic Metabolic Panel (glucose, BUN/Creatinine, calcium, potassium, sodium, chloride, CO2, etc.) and a Lipid profile (Total Cholesterol/LDL/HDL/Triglycerides), as well as a Blood Pressure check.
The cost is $16. The next screening will be June 13, and appointments can be made by calling 419-734-3131 Ext. 3420. For more information about this program as well as other support groups, events and screenings, go to www.magruderhospital.com and click on the events calendar.

The Madison Street Dance Company will hold its first Dance Recital this Saturday, June 8 at 2 p.m. at the Port Clinton High School Performing Arts Center. Their theme is “Oldies but Goodies,” with all the musical dance numbers from before 1999. Tickets are $5 and can be purchased at the dance studio on Madison Street or at the door the day of the show.

Jim Amato passed away surrounded by his family last Saturday. Jim had been struggling with ill health for several years. His family was legendary in...