When Oak Harbor Middle School student Braxtyn Hansen wakes up in the morning, he has one thing on his mind: Work.

“I get dressed, feed the animals, start the tractor, hook up the cultivator, and get to work,” he said.

On school days, he gets off the afternoon bus with the same thoughts of chores and tasks swirling in his mind.

“He drops his bookbag in the driveway and heads to the barn,” said his grandmother, Robin Hansen.

Ten-year-old Braxtyn’s work ethic has paid off, both financially and personally. He owns Little Bub’s Homestead, a farm market that sells his homegrown pumpkins and gourds, mums he handpicked from a wholesaler, and a variety of consignment items, including local honey and handmade crafts. 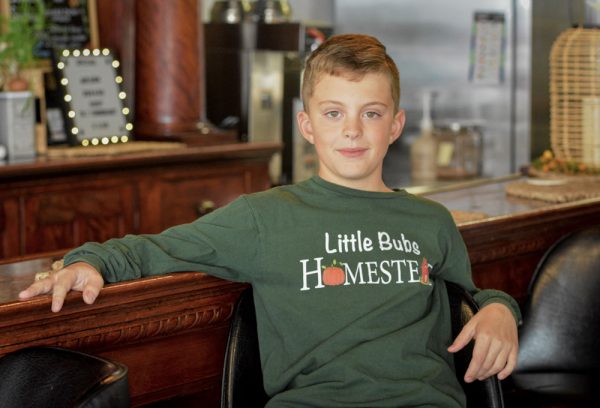 Braxtyn Hansen takes a rare break from work at Wild Brew in downtown Oak Harbor. The ten-year-old entrepreneur was diagnosed this year with Chiari malformation, which limits the kinds of activities he can do but doesn’t diminish his ambition. (Photo by Sheri Trusty)

Little Bub’s Homestead, 959 N Elliston-Trowbridge Rd, Graytown, ended its season in late October but will open again in the spring.

Along with the financial benefits of owning a business, Braxtyn has grown personally as a result of owning Little Bubs Homestead.

“He’s normally a very reserved child, not the type to be the first person to start a conversation. This business gave him confidence,” Ashley said. “Once someone starts talking about pumpkins, he can talk all day. People say it’s like talking to a little man. He knows what he’s talking about.” 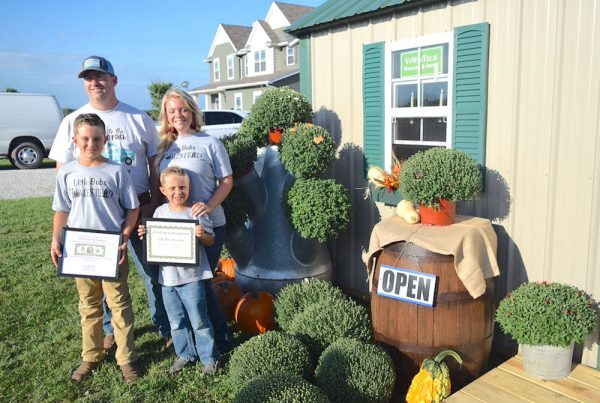 With help from the family Braxtyn Hansen’s Little Bub’s Homestead farm market is open for business. (Photo by Sheri Trusty)

“The chamber said it was pretty big,” Braxtyn said. “The mayor of Oak Harbor came. I didn’t expect to see him.”

Braxtyn’s newfound confidence shone when he introduced himself to the crowd at the ribbon cutting and thanked his guests for attending. But the business has developed another personal strength in Braxtyn: perseverance. This year, Braxtyn was diagnosed with Chiari malformation, a rare condition in which brain tissue protrudes into the spinal canal. The condition prevents Braxtyn from participating in contact sports and other potentially jarring activities like riding roller coasters at Cedar Point.

It does not, however, keep him from doing the work he loves.

“Even through the worst flareups, he’s still out there working,” Ashley said. “This business keeps him going.”

Chiari malformation may limit what Braxtyn does in life, but it can’t limit what he can accomplish.

“I think it’s God’s way of saying I have other avenues for you,” Ashley said. “It’s made him the best version of himself.”