The Art Garage is approved, and already in business in Port Clinton 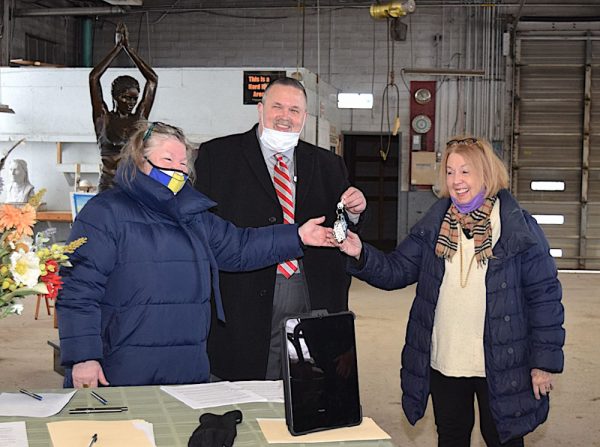 A lease of The Art Garage was given the nod by Port Clinton Council Council at its meeting last week and, while it is a work in progress for the Greater Port Clinton Area Arts Council, the former city service garage was already finding great support and providing some excitement in downtown Port Clinton.

The Greater Port Clinton Area Arts Council (GPCAAC) will operate The Art Garage, or TAG as it is already known, on the west end of West Perry Street, a stone’s throw from the Jet Express complex. While the beige brick building has been a homely city service garage for three or four decades — though few can remember just when it was built — optimism was running rampant among the small crowd inside embracing the transition.

And hopes for a transformation of TAG is already on the drawing board in the form of an architect’s rendering of just what The Art Garage can become this year.

The city and the PCAAC will work in concert to make The Art Garage an artistic success. After all, Snider, former City Service Director Olen Martin, and one of Snider’s summertime workers, known to most as Angel, were instrumental in figuring out an art center could be a game-changer for Port Clinton’s downtown development.

There won’t be a wait to see what TAG will have to offer local folks and fair weather visitors. The talented sculptor Andy Sacksteder has already agreed to take some space in the roomy building, and will be its Artist in Residence. 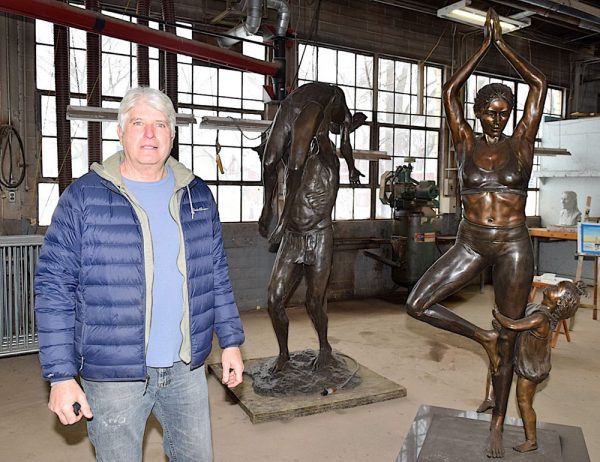 On its snowy debut weekend last Sunday, a surprisingly large group of art lovers in attendance had the pleasure of meeting The Art Garage’s first Artist in Residence, sculptor Andy Sacksteder. On display are two of his bronze sculptures, Uplifting, left, and Tree Hugger. (Photo by D’Arcy Patrick Egan)

A Port Clinton native, Sackstedder and his wife, Chris, are back after spending a few years in Michigan, and happy to be home. His popular sculpture, “The Lightkeeper and his Dog,” is in the shadow of the Port Clinton Lighthouse in Waterworks Park. His sculpture “The Captain and the Kid” sits in Friendship Park in downtown Port Clinton.

The GPCAAC has worked diligently to make TAG happen, said Meyers-Debbink. “I was thrilled at the turnout for our lease signing on Sunday,” she said. “The interest in The Arts Garage has been extraordinary.”

This is an exciting time for the GPCAAC. We’ve been in the planning stages for this arts endeavor for the past six months,” said Morgan.

If locals are wondering what the summertime worker, Angel, had to do with the success of TAG, Mayor Snider has an explanation.

“Angel, whose real name is Wang Yun Ting, is from Kaohsiung, Taiwan,” explained Snider. “When Olen Martin – who’s now working for federal security officials in the Middle East – and I were brainstorming, Angel said that an art center was a big hit where she lived in Taiwan. Because of the art center, a shabby part of town began to flourish, drawing tourists and business to the area.

“That is exactly what we are working to do here in Port Clinton. Our M.O.M. downtown entertainment area flourished in its inaugural season, and TAG has the perfect location in the downtown area for visitor parking, and new entertainment venues.”

GPCAAC officials point out a need for TAG. The area is rich with artistic talent, and there is no central area for artists to meet, learn and grow. Also missing are galleries of groups of artists to show their work, and no studios.

TAG will be an art and cultural destination for artists, art enthusiasts and tourists. It hopefully will become the artistic hub of Ottawa County.

The group has a goal of raising $1.2 million this year through donations and public grants.