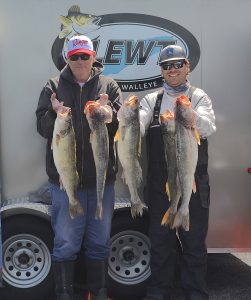 Lucas and Gordon Hahn of Huron show off Saturday’s winning catch of walleye in the Ole Pete Memorial Tournament hosted by the Lake Erie Walleye Trail and the Western Basin Sportfishing Association.

The best location in the nation for filling the cooler with a load of feisty, delectable walleye is red hot right now, and with the COVID-19 pandemic restrictions being loosened around Port Clinton and the North Coast of Ohio, the crowds of anglers have been arriving around Vacationland.

Lake Erie’s large fleet of charter fishing boats are finally allowed to begin their season on Lake Erie, where the huge schools of walleye are luring anglers from all around Ohio and the country.

At this time of year, Port Clinton and the Lake Erie Islands are in full focus of the crowds of walleye fishermen.

While the plentiful Lake Erie walleye population, estimated at more than 100 million fish, can keep fishermen happy all day long, the reopening of the local bars and restaurants this week will make them smile once the boat is back at the dock or launch ramp.

And now, fishermen will have a chance to follow a fishing trip with an adventure at Put-in-Bay and Kelleys Island, which has only recently tossed out the welcome mat.

The typical spring weather — as usual, pretty miserable in a few spots — has not dampened spirits. Balmy fishing weather is in the forecast. Expect restaurants, bars, gas stations and grocery stores to enjoy the barrage of fishermen and early-season boaters.

“The Lake Erie walleye fishing was outstanding last year, and it’s even better right now,” said Sammy Cappelli, a Youngstown-area professional walleye angler. “My wife, Rhonda, and I had been catching lots of trophy walleye in the Port Clinton area all spring.

“We fished in Saturday’s Lake Erie Walleye Trail tournament on Lake Erie, the Ole Pete Memorial out of Huron, and the tournament catches were outstanding despite lots of fog.”

Tournament Director Jason Fischer handed the winner’s trophy in the field of 60 two-angler teams to Lucas and Gordon Hahn, who weighed five walleye totaling 41.18 pounds, an exceptional 8.2-pound average that earned a $3,300 check. The top four teams were all father-son duos.

Second were Gary and Nicholas Zart (40.98 pounds), with Michael and Jack Mochan (38.19 pounds) finishing third. The heaviest walleye was an 11.26 pounder plunked on the scale by Marion Erb and Mitch Shippman.

The national Masters Wallace Circuit will open its season on June 5-6 in Lorain, teaming with the Lake Erie Walleye Trail.

A major disappointment for walleye fishermen and festival fans, though, has been the cancellation of the 40th annual Walleye Festival at Waterworks Park in Port Clinton. The five-day extravaganza was supposed to have started today, but has been put off until 2021 because of the Ohio Department of Health rules governing crowds and social distancing.

That would have been an impossibility because of the exceptional crowds the festival attracts each year. The Walleye Festival is a substantial supporter of Main Street Port Clinton and the Port Clinton Chamber of Commerce, and a major league boost for the Port Clinton economy.

Most disappointed was Nicole Kochensparger, the new director of the chamber, who had for many months poured her heart into the event. Kochensparger said the Waterworks Park event has long been her favorite week of the year.