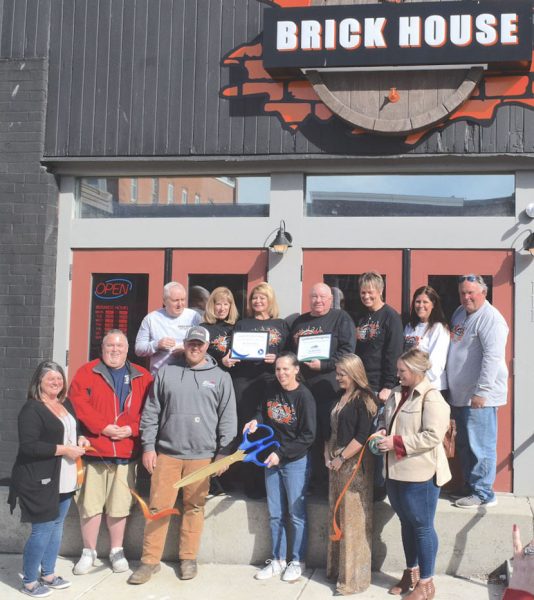 A group of five Port Clinton High School graduates who scattered to the four winds about four decades ago and found success in life returned last week for the ribbon-cutting ceremony of the new The Brick House restaurant on Madison Street in downtown Port Clinton. (Photo by D’Arcy Patrick Egan)

Brian Celek graduated from Port Clinton High School in 1981, and the industrious student parlayed a lawn cutting service when he was in the fifth grade into a successful construction company in Charleston, S.C. Celek, a Clemson grad, still loves his home town and is the member of a consortium of five former Redskins who are finding success with The Brick House on Madison Street in downtown Port Clinton.

The Brick House is in the Hersberger Building, “a cool building that we’re trying to make even cooler,” said Celek. When the group bought the building, the second story windows were boarded over and the century-old building was showing its age.

Much work needed to be done to make it into what Celek insisted was the “Crown Jewel of Madison,” Port Clinton’s new entertainment Mecca for tourists and local folks.

The initial goal was to renovate the building’s facade, adorning it with period-style windows that matched the ones expert aviator and local builder Milton Hersberger had installed. The street-level restaurant lined in red brick had a very soft opening last July with pizza and ice cold beer, as well as appetizers, grinders, salads and specialty drinks.

“Code issues in fixing things up in an old building like that forced us to back up and punt a couple of times, but The Brick House looks wonderful now,” said Celek. “We held my family reunion in Port Clinton last summer, and I was very interested in getting feedback from all 33 members, most of them southerners.

“They all had a wonderful time in Port Clinton, and loved The Brick House.”

Lori Kokinda is one of the partners. She works with her brother, Rich Kokinda, who is also a partner, and his wife, Dianne Kokinda, at Rich’s Drive-Thru in Port Clinton, which their parents operated for decades.

Lori Kokinda believes the power of friendship is responsible for successfully bringing together The Brick House crew.

“All five of us attended Immaculate Conception School in Port Clinton, and all graduated from Port Clinton High School,” said Kokinda.

Other partners celebrating the large crowd of thirsty and hungry well-wishers last Saturday at the ribbon-cutting and grand opening with their wives were Rick and Stacy Milazzo of Pittsburgh, Pa.; Brian and Martha Celek of Charleston, S.C.; and Todd and Margie Warnicke of Port Clinton.

“The friendly vibe, delicious food and ice-covered beer mugs, along with the live entertainment, created a soulful feel that echoes off of the 110-year-old brick wall that surrounds the new local hot spot,” said Lori Kokinda.

“Most important in building the business was incorporating as many locally-sourced products as possible. Our meats are from Tank’s Meats, delicious home-made breads from the Yellow House Bakery and Ballreich’s Chips, just to name a few.”

The partners were all hands-on in creating the new tavern, but Celek gave a lot of credit for The Brick House’s quick success to the Port Clinton city fathers. Mayor Mike Snider and City Council pushed to pass the MORA open-carry law allowing people to carry alcoholic drinks in the downtown area. Safety-Service Director Tracy Colston and his crews have been in an overtime mode in recent years with a myriad of renovations to the city’s roads and infrastructure, and planting the Meals on Madison (MOM) Stage on the busy downtown street.

“To have the MOM Stage right in front of The Brick House is priceless,” said Celek. “It’s a win-win situation for us, and for the city. It brings together tourists in the warm weather months, and locals all year round. At the ribbon-cutting ceremony on Saturday, I bumped in to a lot of people I haven’t seen in 30 or 40 years.

“And we’re not done looking in Port Clinton. The success of The Brick House has had us asking ourselves, ‘What’s next?’

The happy crowds have an answer for them. The limited seating in The Brick House demands the group renovate and open the second floor of the building to customers.

“We have had a great time working with our wonderful old friends, partnering to put this special restaurant together. We finished that job and we’re still good friends,” he said with a laugh. “So that just might have to be our next group project.”