The church that was supposed to fail; Pastor Bob Butcher wouldn’t let it! 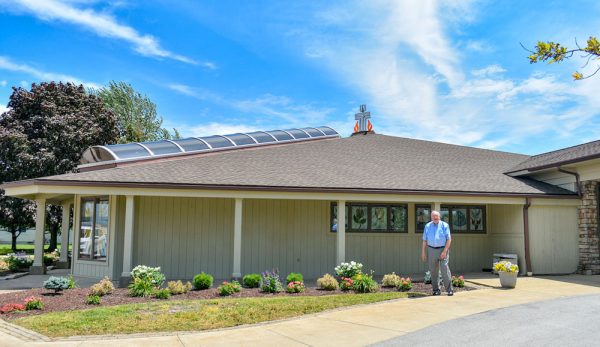 Pastor Emeritus Robert (Bob) Butcher stands in front of one of Port Clinton’s most architecturally distinctive churches, Firelands Presbyterian Church, which he led from 1983 to 2008. (Photos by Sheri Trusty)

Firelands Presbyterian Church is one of the most uniquely constructed churches in Port Clinton. Instead of a sanctuary, it features a common space that can be expanded or closed off with sliding doors. Movable, cushioned seats replaced traditional pews.

A large skylight seems to draw heavenly beams into the room during services. In the midst of those architectural distinctions it is its most unexpected feature.

The church, you see, was designed to fail.

Pastor Emeritus Robert (Bob) Butcher, who led the church from 1983 to 2008, was its newly-installed, first full-time pastor when talks of construction began.

The church had been meeting in various temporary locations since it was chartered a year earlier in 1982, and the congregation was ready for its own building.

Three years earlier, in 1980, 10 local residents approached the Presbytery for permission to form a church in Port Clinton. The presiding Presbytery wasn’t so sure it agreed.

“The Presbytery was reluctant because there were so many churches here, but the group was persistent,” Butcher said.

The Presbytery was even less enthusiastic when the congregation wanted to construct a building, and as a result the Presbytery placed unusual restrictions on its design.

“The Presbytery was so uncertain about the future of this place that they insisted the building be built in such a way that it can be converted into something else if and when it failed,” Butcher said.

The Presbytery had worried in vain. Under Butcher’s leadership, the church impacted thousands of people inside the building, throughout the community, and around the world.

Early on, Butcher helped create a mobile meals program for local residents. He was instrumental in opening the now-closed Wide World Shop in Port Clinton, which supported workers living in Third World countries.

In its infancy, the church made a pledge to support the arts. From that commitment came the popular Musical Arts Series, which brings world-class musical performances to Firelands Presbyterian every year.

“Early on, we took a stab at presenting a concert or two,” Butcher said. “I recruited Shirley Hany, who was a great musician. After she died, we held a concert in her memory. We got some money from it, so we did it again and again.”

The concert series reached a lull for a time, but Butcher stepped in and revived the program.

“Twenty years ago this year, I decided to start it again,” he said. “Now we do seven to eight concerts a year.”

Butcher said the “biggest thing we tackled” was the creation of Vineyard on Catawba, a senior living campus that formed from a desire to serve senior citizens.

“Dick Uhle, Connie Brand and I organized the corporation to build the retirement community. It was an idea we had because we wanted to do a ministry with the elderly,” Butcher said. “We eventually sold it, but I stayed on the board, so I kept my hand in on our idea.”

Butcher moved to Bluffton, Ohio last year, but he still returns to help lead the Musical Arts Series. Looking back at Firelands Presbyterian Church, which was expected to fail before it was formed, he sees decades of dedicated people who made it flourish.

“It didn’t fail because of the people we attracted to the church. No one ever called us liberal or conservative, but we were seriously Christian,” Butcher said. “I was the pastor, but my gift was surrounding myself with people who knew what they were doing and letting them do it.”