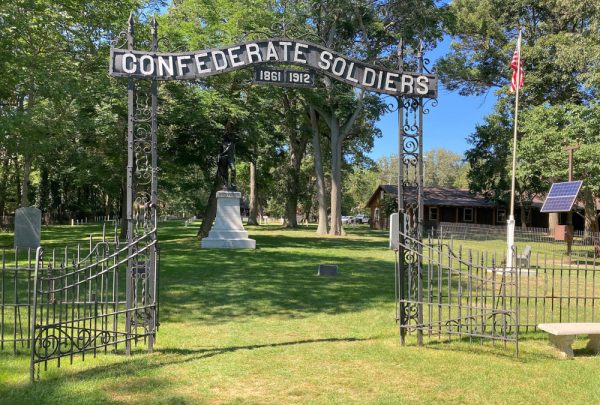 Located on Johnson’s Island just off the Marblehead Peninsula, a Confederate Civil War Cemetery sits in mute testimony to a flawed cause. A $2 dollar toll and a short ride over the causeway brings visitors to the tree-covered burial site of 267 Confederate officers. 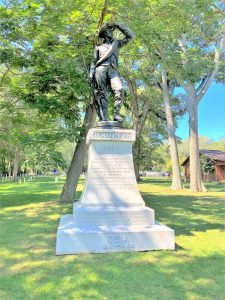 Erected in 1910 by the Daughters of the Confederacy, a simple bronze statue of a confederate soldier stands silent guard at the entrance to the cemetery. (Photos by Phil Wheeler)

In 1905, George Santayana, a philosopher, essayist, poet, and novelist, wrote “Those who cannot remember the past are condemned to repeat it.” The men who lay in the hallowed ground on Johnson’s Island were fathers, sons, and husbands. While the cause they fought for should be and has been scrutinized, the sacrifice they made for their convictions should never be forgotten.

This past labor Day saw many of the gravestones with pennies on them. In the U.S., this practice became common during the Vietnam war, but the tradition of leaving coins on the headstones of military men and women can be traced as far back as the Roman Empire.

Today, leaving a penny at the grave means simply that you visited.

In late 1861, Federal officials selected the 16.5-acre site on Johnson’s Island as the location for a prisoner of war camp to hold up to 2,500 captured Confederate officers. Sandusky Bay offered more protection from the elements than on other nearby islands, which were also closer to Canada in the event of a prison break. The prison opened in April 1862. The U.S. government leased half the island from private owner Leonard B. Johnson for $500 a year.

A 15-foot-high wooden stockade surrounded 12 two-story prisoner housing barracks, and more than 40 buildings stood outside the prison walls. They included barns, stables, and a barracks for officers. The surrounding woods of hickory and oak trees would provide lumber and fuel.

More than 15,000 men passed through Johnson’s Island, and in March 1865 the prisoner population peaked at about 3,200. About 200 prisoners died as a result of the harsh Ohio winters, food and fuel shortages, and disease. Still, Johnson’s Island had one of the lowest mortality rates of any Civil War prison.

Perhaps the worst condition the prisoners endured was boredom. There was not much to do between morning and evening roll call. The prisoners used the time to write letters home to sweethearts, families and friends, while others kept diaries or journals that were published after the war, leaving a record of what occurred inside the stockade.

Others spent the time planning to escape to either Canada or the south. There were 12 prisoners known to have escaped from Johnson’s Island. It is difficult to determine the total number of escape attempts, as the entry in the remarks column of the list of prisoners often simply said “not here, must have escaped.”

In addition to escaping, there were three other ways to leave the island. By exchange of a like-ranked union officer, or parole. In both cases, the officer promised on his honor to not take up arms again during the war.

The second was by death, and the third way off the island was by taking the Oath of Allegiance to the Union. There are only 50 documented cases of that occurring.

In 1990, Johnson’s Island was designated as a National Historic Landmark recognizing its significance in the Civil War as one of the premier Union prisons. The Confederate Cemetery, located on Johnson’s Island is currently the only publicly available part of the prison.