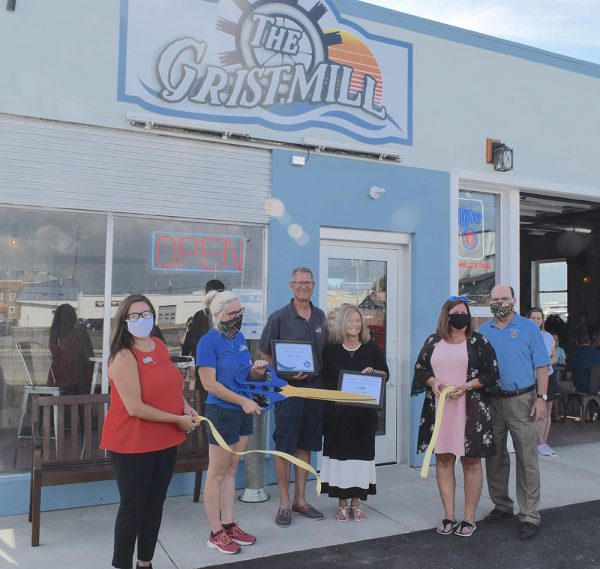 The Gristmill opened its doors on Monroe Street in downtown Port Clinton last week, as general manager and co-owner Brooke Rodwancy employed the Port Clinton Chamber of Commerce scissors for a ribbon cutting on a beautiful Tuesday afternoon.

The Gristmill, a grungy abandoned gas station transformed into a trendy downtown Port Clinton pub in a surprisingly short time, was buzzing with customers on a recent sunny Tuesday afternoon. The amazing renovation on Monroe Street, a stone’s throw from the Portage River Lift Bridge and the Jet Express docks, has all of the right ingredients.

Mixologist Brooke Rodwancy — the co-owner and general manager — had earned her reputation as an expert behind a bar after four years at the Port Clinton Yacht Club. The Port Clinton High School grad invited a legion of friends to stop at her new open air pub, and many visitors found it a convenient place to have a drink before heading out to Put-in-Bay on the Jet Express.

Few locals ever thought the property would become more than a much-needed parking lot on a busy corner of Port Clinton’s River District. It had been abandoned long ago, but Brooke and her dad, Don Rodwancy, had a different vision.

“Brooke wanted her own bar, so we became her backers and took a chance on this place,” said Rodwancy, an executive at AutoGate Inc. in Berlin Heights. He admitted it was a spur of the moment decision.

“We looked at the building, and closed the sale about 30 days later,” said Rodwancy, with a laugh. The rush to convert the gas station into a slick pub went into overtime and Rodwancy, a former commodore of the Port Clinton Yacht Club whose 50-foot cruiser is still in dry storage on the Portage River because of the project, led the charge.

A long time ago there was a grain mill behind the gas station, hence a pub named The Gristmill. They built indoor and outdoor stages so Brooke’s fiance, James Hensley of the popular local bands JK All Day and The Junk, can feature local talent.

There wasn’t room for a kitchen, so The Gristmill will rely on nearby Sloopy’s and The Clinton House to keep customers fed.

“The downtown entertainment scene is on the upswing,” said Brooke, and she knows what people enjoy. The coolers are bristling with local craft beers, the back bar has top shelf liquor and she loves creating new and unique drinks, many featuring fresh fruit.

“I love coming up with a new drink every day,” she said, with a smile.

The Gristmill is part of the MORA zone, allowing revelers to cruise Port Clinton’s downtown area with a drink in hand while they visit, listen to music at the Meals on Madison (M.O.M.) area on lower Madison Street and visit the area retail shops.

“We’ve seen our downtown traffic really increase in recent weeks, and people are wearing face coverings and hanging around to listen to music, shop and enjoy their friends,” said Mayor Mike Snider of Port Clinton. “Real estate sales have reflected a renewed interest in downtown properties, and people credit some of that to the renovations we’ve made to the downtown streets.”