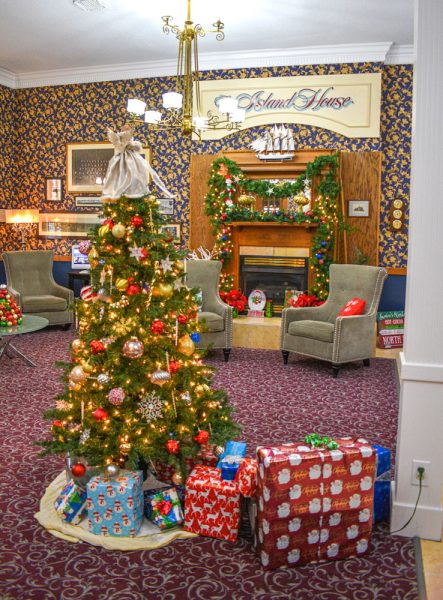 The Island House Hotel’s grand lobby is decorated for the holidays and ready to welcome Christmas and New Year’s Eve guests. (Photo by Sheri Trusty)

What do Marilyn Monroe, J. Paul Getty, The Ringling Brothers and Babe Ruth all have in common? They’ve all been guests at The Island House Hotel.

The 1886 hotel, which is listed on the National Register of Historic Places, has had customers questioning if its doors are still open this winter. Bart Erwin has a definitive answer for them.

“We’re open all winter long,” said Erwin, who serves as president of The Island House Condominium Association, which owns the hotel.

The Island House, located at 102 Madison St., Port Clinton, is a hotel owned by a condominium association, making it a condo hotel. Several people own the individual units, and they work together as an association to keep The Island House Hotel alive and thriving.

A management company, which works under the guidance of the association, runs the daily operations of the hotel to provide customers with a typical hotel experience. Reservations and overnight stays are the same as they are at any hotel.

“From the customer’s standpoint, it’s like a normal hotel,” said Mayor Mike Snider.

Once they’ve booked their rooms and stepped into the hotel, customers find themselves walking through the same grand lobby that once greeted Humphrey Bogart, President James Garfield, Al Capone and William Randolph Hearst.

“The hotel has welcomed a host of famous people,” Erwin said. 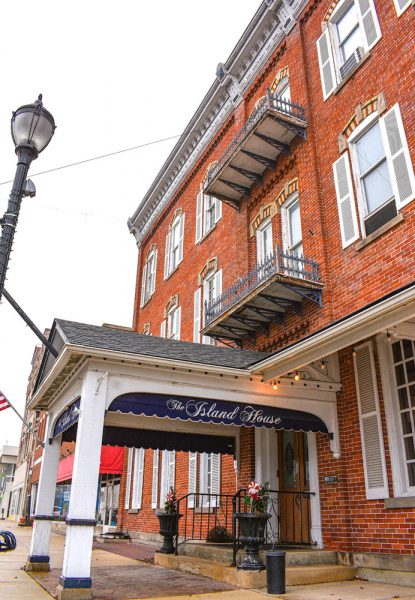 The structure of The Island House Hotel, which was built in Italianate style and is now listed on the National Register of Historic Places, was one of the draws that convinced popular Columbus-area restaurateur Jason Liu to recently purchase the hotel’s two retails spaces. (Photo by Sheri Trusty)

The Island House Hotel has a few of its 39 rooms still available for New Year’s Eve, giving overnight guests the benefit of stepping off the hotel steps and into the midst of the Walleye Drop celebrations. The event will feature a kids’ Minnow Drop, live entertainment at area bars, a DJ on the downtown Stage, fireworks, and county down Wylie as he performs his internationally unique Walleye Drop at midnight.

The Island House Condominium Association is looking forward to next summer, when popular Columbus-area restauranteur Jason Liu may reopen the hotel’s restaurant. Liu purchased both retail spaces inside the hotel, but he is unsure if he will bring his modern fusion-style cuisine to Port Clinton or use the space for something else. Either way, there is a possibility something will emerge this spring or summer.

“But I’m not sure yet,” Liu said. “Right now, I’m not physically committed to opening the restaurant myself.”

Yet Liu doesn’t plan to leave permanently untended an investment that he made when he was drawn to the historic building and the people of Port Clinton.

“I love the history and the building itself. The mayor and the city staff have been very welcoming,” Liu said. “We’ll work with local people to try to open a restaurant and bring life back to the hotel.”

In the meantime, the condominium association will keep the hotel thriving through the winter as it welcomes the next generation of guests into its historic walls. The most convenient method of booking a room at The Island House Hotel is by calling the front desk directly at 419-734-0100.