The ‘Mummies’ are back for the Rock the Light Music Festival on Sept. 6-7

Jefferson Starship is headline on Saturday

The ‘Mummies’ are coming back!

Here Come the Mummies, an eight-piece funk-rock band of reportedly 5,000 year-old Egyptian Mummies with a one-track mind who delighted Port Clinton crowds last year at Waterworks park for the inaugural Rock the Light Music Festival, announced they are returning on Friday, Sept. 6.

Guaranteed to cap the two-day concert in style is Jefferson Starship, the headliner on Saturday, Sept. 7.

The concert will have a new look for its second go around, according to concert promoter Main Street Port Clinton and the Port Clinton Chamber of Commerce. A large Main Tent will provide a spacious stage for the featured bands, with a variety of local groups also performing on a Party Stage inside the big tent.

The opening bands appearing on Friday, Sept. 6 will be Athens Wheeler and Master TC & The Visitors, with Chris Jamison and Here Come the Mummies following on the Main stage. Miss Kitty & The Litter and the Eric Sowers Band will open the Saturday, Sept. 7 concert, followed by Jacks Ford and Jefferson Starship.

Ticket sales made their debut this week, and are available at the Port Clinton Chamber of Commerce office and the Great Lakes Popcorn Company, both on Madison Street in Port Clinton. Friday night tickets are $25, $30 after May 28. Ottawa County residents get a local discount with tickets $20 until Aug. 1. Saturday tickets are $35, $40 after May 28.

Main Stage VIP passes are $100 for either Friday or Saturday, with a weekend pass $150. VIP seating includes folding chairs in the VIP section, and a special VIP bar and restrooms.

Jefferson Airplane founding member, the late Paul Kantner, created Jefferson Starship with the collective spirit in mind that he carried with him throughout his life. The band members, past and present, have been exploring the mysteries of music for more than 100 collective years.

So who are the “Mummies?” No one really knows. Their mysterious personas, cunning song-crat and unrelenting live show, according to the band, “will bend your brain and melt your face.”

The “Mummies” have been an instant hit whoever they perform, and they’ve been traveling the country non-stop in recent years. Despite being a first-year concert in 2018, the Rock the Light Music Festival enjoy success in its first concert effort.

“We were delight to see the fans response last year,” said Ron Miller of The Listening Room at Our Guest Inn, who was instrumental in booking the bands and bringing the concert venue together. “We had excellent crowds for an inaugural concert. After talking to fans after last year’s concert, and their hopes we could bring back Here Comes the Mummies, I expect a wild time this year.” 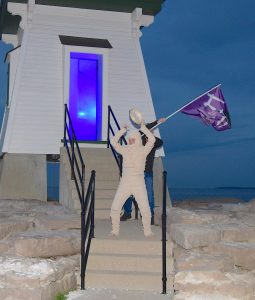 Making an early visit to the Port Clinton Lighthouse to announce the lineup for the 2nd annual Rock the Light Music Festival at Waterworks Park on Sept. 6-7 was one of the local “mummies,” ready to kick off an early celebration. (Photo by D’Arcy Egan) 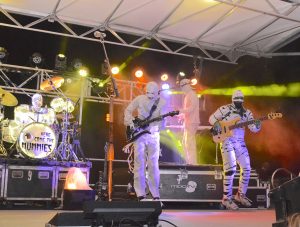