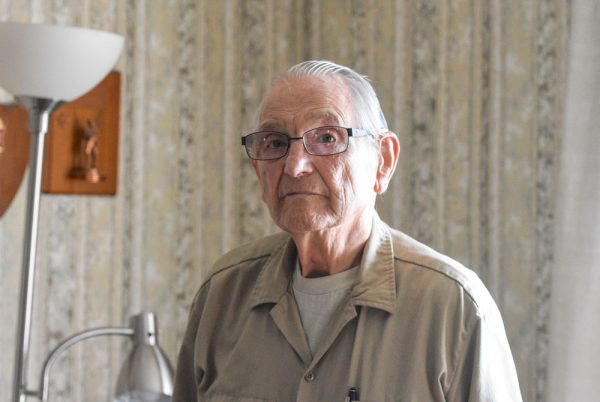 Roger Carpenter’s strict rules and soft heart toward new recruits earned him the nickname “The Preacher.”

It’s been said that in times of war, it takes ten behind the scenes to keep one on the front. For Army veteran Roger Carpenter, working behind the scenes as a mess sergeant meant giving soldiers their best life before they headed off to war.

Carpenter, 94, grew up in Oak Harbor and still lives in the home his family owned when he enlisted in the military in 1948. He served until 1953.

“I started in the National Guard and got activated in 1951,” he said.

When Carpenter was a young child, his father built a stool so Carpenter could reach the stove in their Oak Harbor home to “fry meat or eggs.” Those early cooking lessons created the opportunity for him to work as an Army mess sergeant. He earned the rank of Sergeant 1st Class with the 148th Infantry, 37th Division Tank Company. He spent most of his service at Fort Polk in Louisiana which became a draftee training outfit during the Korean War.

It was there he earned the nickname, “The Preacher.”

“We were getting 18-year-olds from lower Michigan and northern Ohio. Some of them were inner city kids and some had never been away from home,” Carpenter said.

In the midst of strict discipline and the fear of war service, many of the young men felt overwhelmed.

“I spent many hours on the back porch with the boys getting them over their homesickness,” Carpenter said. “Sometimes, they just needed a shoulder to cry on.”

But it wasn’t just homesick boys who spent time on The Preacher’s back porch.

“I didn’t permit the men to swear, smoke or drink alcoholic beverages in the mess hall,” Carpenter said. “When someone got loudmouthed, we picked up his tray, and he finished his meal on the back porch.”

Those were the rare moments.

Mostly, young soldiers training for war found respite in Carpenter’s mess hall. He was more interested in serving comfort than simply serving food so, as often as possible, he and his cooks prepared made-to-order meals and specialty dishes.

Eggs were cooked to order, bread wasn’t toasted until a soldier’s plate was ready, and the cooks went out of their way to offer dishes like freshly-baked cinnamon rolls. Carpenter’s efforts earned his crew many Kitchen of the Month commendations.

“If I had handpicked my cooks, I couldn’t have done a better job,” he said.

Carpenter’s care for the men in his division nearly got him in trouble with the police. Carpenter said the 37th Division was among the first to integrate African Americans. Among them was an 18-year-old man named George Washington.

Carpenter, Washington and two other men headed to New Orleans on leave one day, hopped on the bus, and – ignoring the sign demanding that African Americans sit in the back – chose front-row seats. The bus driver refused to move the bus, and Carpenter exploded.

“I told him, ‘I want you to be aware that in 30 days, this man is probably going to Korea to get his head shot off. You’ll have to get the police to get us off,’” Carpenter said. “He moved the bus.”

That day, The Preacher’s words moved hearts and buses.