The thrill of a bicycle under the Christmas tree 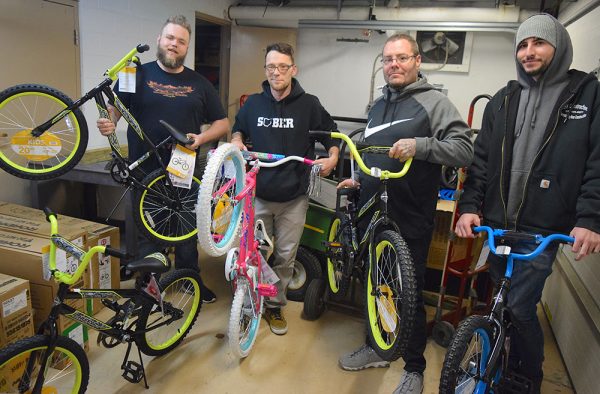 Volunteers at the Ottawa County Sheriff’s Department maintenance garage get 37 bicycles ready for the annual Salvation Army Toy distribution on Wednesday, Dec. 18, thanks to the yeoman’s effort for the third year in a row. (Photo by D’Arcy Egan)

Bill Marshall knows the thrill of finding a bicycle under the tree on Christmas morning. He’s made it his mission to help make that happen for local families in need.

For the third year in a row, Marshall and his family and friends have rounded up funds to buy new bicycles and tricycles for the annual Salvation Army Toy Distribution, held on Wednesday, Dec. 18. In addition to a wide variety of toys, backpacks, warm clothes and much more, the Salvation Army volunteers will bring the biggest smiles to youngster’s faces on Christmas morning with a shiny bicycle.

“I can still remember my first bicycle,” said Marshall, a DART Office with the Ottawa County Prosecutor’s Office. “I was infatuated with anything that had wheels, and still am. That Huffy bicycle back in 1973 when I was seven years old was the greatest Christmas present ever.”

Marshall loved to race BMX bikes, and have the chance to do wheelies around the neighborhood. Those memories led him to tell his family three years ago that for Christmas, he’d rather have bicycles, or the funds to buy them, so his Christmas presents for kids would benefit the community.

“From tricycles to 24-inch bicycles, they’ve been wonderful presents for kids whose families might not be able to afford such a gift,” said Marshall. “And everyone has helped by chipping in. Even Sheriff Steve Levorchik’s No Shave fundraiser, which collects $30 a month from county employees who elect to grow a winter beard, has helped to buy bicycles.”

There is obviously a need around Ottawa County.

The Salvation Army Toy Distribution will help nearly 500 families and 1,300 children have a happier Christmas again this year. It is a magical time for the Salvation Army Port Clinton Service Center, said Director Maureen Saponari, who rounds up an army of avid volunteers for an orderly distribution of gifts.

“We still need bell ringers to man the many Salvation Army Red Kettles around the area,” said Saponari. “We have a Red Kettle goal of $67,000 this year, and still have a long way to go to raise that amount.”