The winter that wasn’t 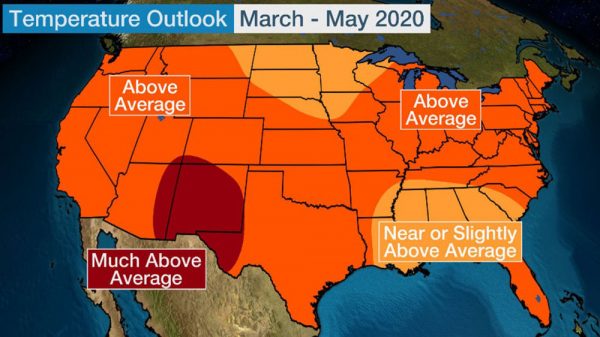 The NOAA Climate Prediction Center has much warmer spring temperatures predicted for March through May in Ottawa County. Spring rains, report the NOAA experts, will bar above average, but not by very much.

When March rolls around and the coziness of the holidays is long gone, it’s pretty much just dull, dark winter. There’s no escaping her frigid breath. This winter, though, just might go down as the winter that wasn’t, at least in terms of what we are used to enduring.

Basically, Ohio is more like three separate winter regions, divided in weather, but united in being forced to watch underachieving sports teams just as soon as college football is done. There are the lake-effect snowstorms along the snowbelt, the moderate cold of the central lowlands and Columbus, and Cincinnati with its almost subtropical humid climate. Ranking each state from 1 to 50 for worst winter weather (say that three times fast), Minnesota is number 1, and Ohio comes in at 14. This is one of those times where you probably actually want to finish last.

The lack of snow so far has not just been a Port Clinton thing. Each major Ohio city to date is down from what wasn’t a terribly snowy winter of 2018-19. As of Feb. 3, Port Clinton is down 11.4 inches. The same unusual weather goes for temperatures running well above normal across the state. Toledo has averaged 8.5 degrees warmer this winter.

The first two months of the year have seen a very positive Arctic Oscillation (AO). AO refers to an atmospheric circulation pattern over the mid-to-high latitudes of the Northern Hemisphere. To put it simply, the more positive the AO, the warmer (and wetter) the weather is likely to be.

[WARNING: Sound of the other shoe dropping] Computer models indicate that above-average temperatures and at least a 33% chance of higher precipitation is likely for the Port Clinton area.