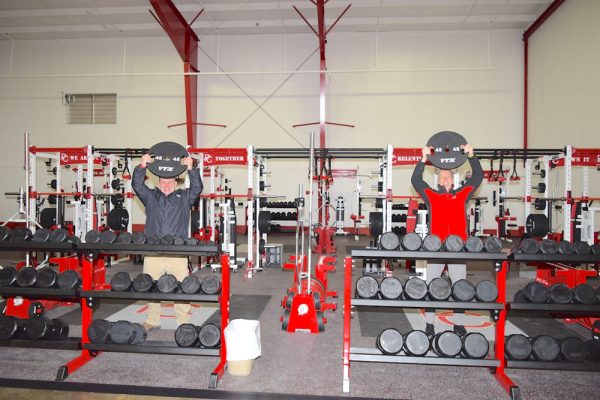 Aaron DiBucci, left, the Director of Facilities and Maintenance, lifts some weights with Superintendent Pat Adkins in the new weight room of the PC Field House (Photos by D’Arcy Patrick Egan)

The brand, spanking new 26,000-square-foot Port Clinton Field House, a state-of-the-art facility that has surprised everyone in the community who got to tour it, opened its doors on Sunday.

It has been the dream of the Port Clinton Board of Education, the Port Clinton Athletic Boosters, Athletic Director Rick Domminick and especially Superintendent Patrick Adkins to find a modern home for the school’s athletic programs. With contributions by many, and especially local entrepreneurs Fred and Dawn Zink, a deal was made last August to convert the Zink Warehouse at the corner of Short and Railroad streets on Port Cinton’s East side into the red-and-white field house of their dreams. 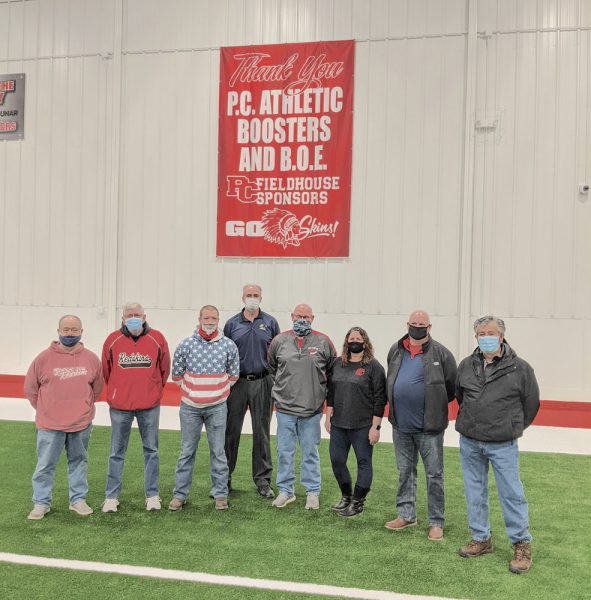 The deal was made possible by the Zinks selling their warehouse at a drastically reduced price, handing over the $520,000 facility to the school board for just $225,000. With the Port Clinton Athletic Boosters donating $400,000, the Port Clinton Board of Education contributed $575,000 to the $1.2 million facility.

“This will be a multi-functional building for all of our athletes,” said Supt. Adkins. “We have long wanted a field house for Port Clinton athletic programs, but could never have imagined something this substantial. The Zink Warehouse, which was built in the early 1980s and is structurally in outstanding condition, provided a far larger space than new construction would have allowed.”

“The building will allow for off-season workout space for several of our Port Clinton High School athletic teams, such as baseball, softball, soccer, golf, wrestling and track,” said Athletic Director Dominick. “The indirect benefits of the Field House relate to some of our other programs, such as baseball, volleyball and even tennis.

“Baseball and softball, in particular, have always needed gym time throughout the winter and into the spring. With the PC Field House, that will not be an issue going forward. It will allow more time for our basketball and volleyball programs and for the youth programs.”

Dominick pointed out that spring weather, always a problem on Ohio’s North Coast, won’t be much of a deterrent any more. Indoor practice for the baseball, tennis and softball teams will be available. 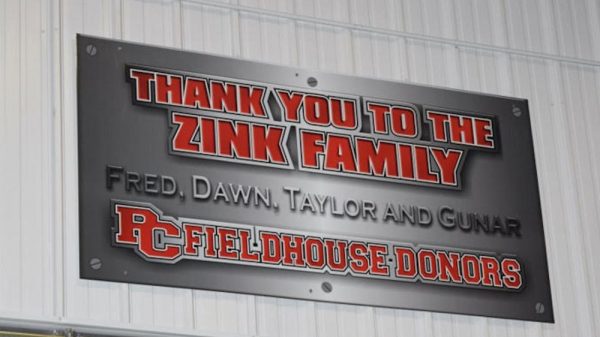 Motivational signs abound in the new PC Field House, as well appreciative signs for the benefactors of the new facility.

Gunar Zink, a sports star at Port Clinton before graduating a couple of years ago, is a bit jealous of the new facility.

“Gunar, who works for his dad now, said he wished he could have had the benefit of a field house like this when he played sports for Port Clinton,” said Dawn Zink. Their daughter, Taylor, now a second-year law student at Capitol University, was a record-setting volleyball player.

President John Gluth of the Port Clinton Athletic Boosters, famous for their fund raising efforts for the sports programs, echoed those sentiments.

“Our son, Trey, is now playing baseball at Ohio Wesleyan, and the new PC Field House is far more sophisticated than what the teams have where he goes to college, and compared to just about any college field house in Ohio,” said Gluth. “This is an amazing surprise for the Boosters Club. It is a beautiful facility.”

“We still have to finish working on the outside of the building this spring,” said Supt. Adkins, after guiding tours of the building on Sunday with sponsors, coaches, Port Clinton student athletes and their parents. The red-and-white interior displays a wide range of motivational signs, and such amenities as stations for cell phones while athletes are working out, lockers and even some storage.

“We are extremely grateful for the continued support of our Port Clinton Athletic Boosters, combined with the generosity of the Zink Family. This facility will address the multiple needs in our district, including a much-needed wrestling facility, centralized district storage, a garage for school vehicles, indoor athletic training facilities for all student athletes, and additional weight training facilities to compliment our stadium and high school facilities, which we have outgrown.”