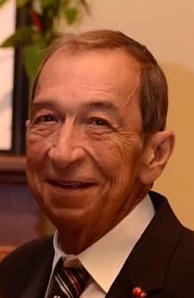 He graduated from Port Clinton High School in 1970. His first Job was in 1967 at Nissens Cleaners, Ottawa Warehouse Co. 1968-1970, from there he went to Whirlpool where he worked for 33 years and 3 months before pursuing a dream of his to open a pool hall, Rack Attack, where he met one of his later in life best friends, Randy Majewski. He was a member and past Commander of Port Clinton Power Squadron.

He enjoyed fishing with his friends and dad, trips to Atlantic City with the late Daniel Mariscal, shooting pool, and most of all spending time and aggravating his children and grandkids. He was close with his Uncle Vance and spent time watching the Cleveland Browns and picking on him for his love of Chevy trucks.

A cherished memory from his granddaughter Samantha is eating Snickers ice cream for breakfast on her trip to Virginia with just the two of them. Sy is still convinced his grandpa invented apple pie ala mode. Maggie will never forget his peanut butter toast (her mom doesn’t make it right). Jaxon’s favorite memory is Grandpa Fudd laughs and plays with him. Jasper will be reminded of Grandpas sense of humor, love of food, and orneriness every chance we can. We will all continue the Christmas sandwich tradition with spicy mustard.

Those left to cherish his memory are daughters: Stacey (Stevie Boy) Nickloy, and Jolene (Josh) Lochotzki both of Port Clinton. Four amazing grandkids: Samantha, Sy (his twin), Jaxon and Jasper and adopted granddaughter Maggie Moo Moo. Love of his life, mother of his daughters and friend Elizabeth (Betty) Velliquette, His Angels on Earth Kami Hernandez and Amanda Conte. Shirley his mom, two sisters, one brother and many nieces and nephews.

He was proceeded in death by his father, Theodore A. Velliquette.

Stacey and Jolene are asking for any stories that explain the famous nickname “Fudd”. It has been a life long question of his girls and they told their dad they would find out one day!

He will be buried at Riverview Cemetery. Due to Covid-19 there will be no service.