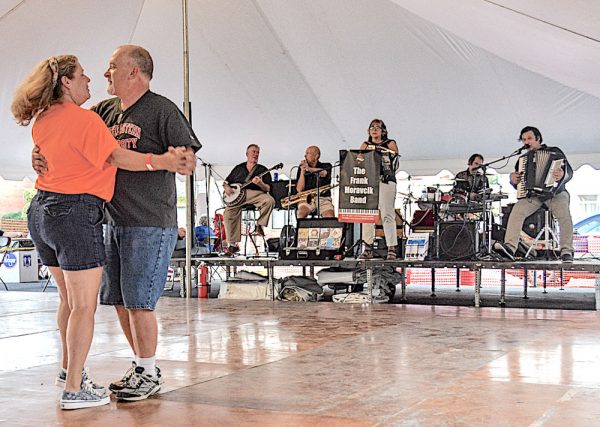 A couple polkas to the music of the Frank Moravcik Band during the festival on Friday night. (Photo by Sheri Trusty)

For the past 17 years, Ed Verkin, Jr. has made the 12,000 pierogies served during the annual Perch, Peach, Pierogi, & Polka Festival hosted by the Knights of Columbus at Denny Bergman Hall. During this year’s festival on the Labor Day weekend, he passed the job to his son, Ed Verkin III, who kept the serving tables loaded with steaming pots of pierogies.

“I’ve made the pierogies since we started doing this, and last year my son helped a little. This year, he took over,” said Ed, Jr. who is the Grand Knight of Knights of Columbus Council 1750. 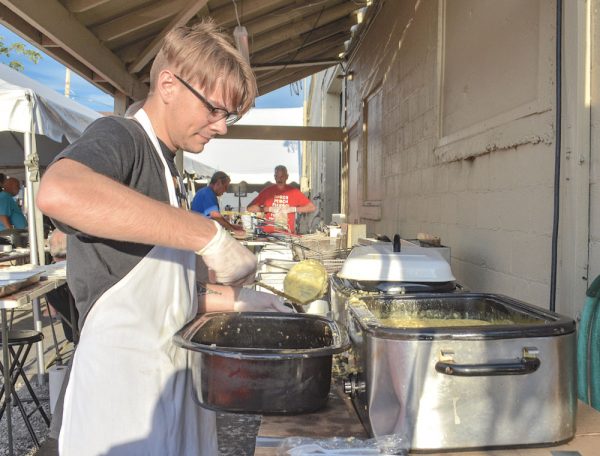 Ed Verkin III has been helping with the annual Perch, Peach, Pierogi and Polka Festival since he was about three years old. This year, Ed III, who is a cook in the Army Reserves, made all of the 12,000 pierogies served at this year’s festival. (Photo by Sheri Trusty)

“We make 11,000 pounds of perch. Some years, I don’t know how we do it,” said Jerry Arnold, who co-chairs the festival with Ed Verkin, Sr.

“The vast majority of people that come are from out of town, which is good for Port Clinton. Some come from other states like New York, Pennsylvania and Kentucky,” Arnold said.

They make the trip to Port Clinton for the food and the fun.

“They just enjoy it. It’s well-organized, clean and friendly. We’re here to serve and help people have a good time,” Arnold said. 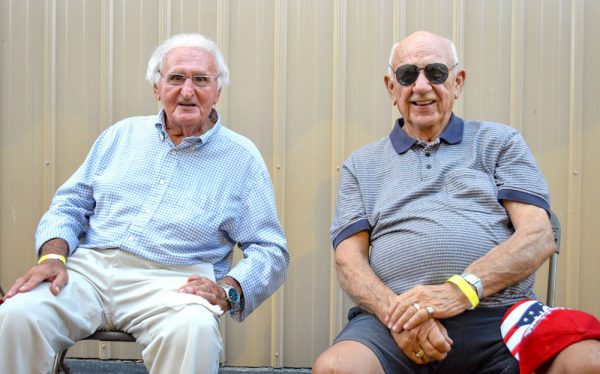 Friends and former bandmates Don Gresh, left, and Bill Glovinsky listen to the music during the Perch, Peach, Pierogi and Polka Festival on Friday night. They planned to attend all three days of the festival. (Photo by Sheri Trusty)

Although many people were from out of town, there were still plenty of locals lining up to buy perch and listen to the bands. Among them were Don Gresh and Bill Glovinsky, both of Port Clinton, who played accordions in the band The Polka Dots for 25 years beginning in the 1960s. They attended the festival on Friday night to listen to polka music and reminisce.

“We love the polka music, love supporting the Knights of Columbus, and love watching people dance,” Glovinsky said. “We played on Put-in-Bay when there were only three bars there. There were only Put-in-Bay people then, no tourists,” Gresh said.

The two planned to attend the festival all three days.

“We know the bands, and we know most of the band members, so we’re committed,” Glovinsky said.