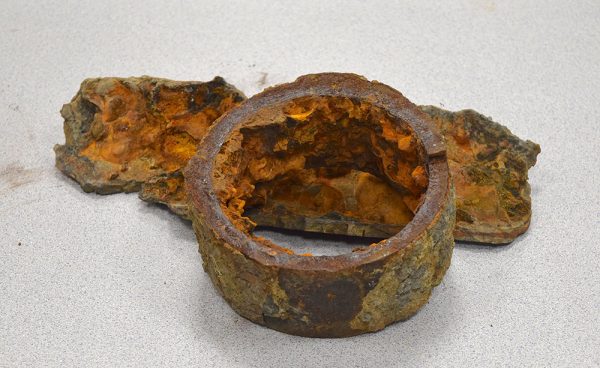 Port Clinton officials made their point at a public hearing on antiquated infrastructure under the city streets by displaying a hunk of water line filled with corrosion. (Photo by D’Arcy Egan)

Mike Snider became the mayor of Port Clinton five months ago, and helped to light a fire under Port Clinton City Council and a host of city officials. Poggemeyer Design Group of Bowling Green, Ohio was brought in to plot and plan a way to finally improve the city’s infrastructure after many decades of neglect.

“Now we have to move forward,” said Snider at a public hearing last Thursday. “Continuing to put band aids on the problem will not solve the problems. I’ve been talking to people since the $20 million public infrastructure plan was introduced in July, and feel strongly most citizens get the need for it and approve it.”

The majority of the crowd of about 80 at Port Clinton High School’s Performing Arts Center certainly did. Surprisingly, many didn’t care about the need for transparency by making the proposal a ballot issue in 2020.

Mary Snyder, owner of Mary’s Blossom Shoppe on Madison St. in downtown Port Clinton for 40 years, agreed. The makeover of Madison Street the last two years has certainly helped downtown businesses, but the infrastructure problems have thwarted progress in Port Clinton for decades, she said.

There were questions from the audience, and they were easily handled by Snider and Jack Jones of Poggemeyer Design Group.

While Port Clinton may have been a town divided just six years ago when proposals were made to develop Waterworks Park into a $60 million resort, the present plan is to spend almost $20 million fixing Port Clinton’s roads and stormwater and sewer lines. Poggemeyer Design Group has developed the plans, and the city will seek state and federal grants and loans to make it happen.

The estimated monthly tab for homeowners would be about $20 per month, or less.

Port Clinton has been around for 191 years, said Snider, and this is the first plan to modernize its roads and infrastructure. He said that when he became mayor, he asked focus groups what the city needed. Fixing the roads, the sewers and the water lines were at the top of the list.

There will be another public meeting on the plan on Thursday, Oct. 24 at 6 p.m., at the Ottawa County Family Advocacy Center at 570 S. McKinley Dr, Port Clinton.