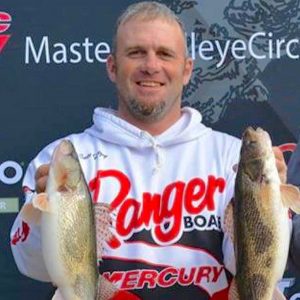 Scott Geitgey of Canton, Ohio weighs in a couple of walleye during a Cabela’s Masters Walleye Championship on the Illinois River in Spring Valley, Ill. Geitgey and partner David Kolb of Bay City, Mich. caught 23 pounds, 3 ounces, to tie Ohioans Dan Johnson and Larry Rhoads for the win in the standings, but had to settle for second in a tie-breaker in the March event.

Walleye tournament anglers from around the country will be making a splash on Lake Erie on Friday and Saturday, June 21-22, in the Port Clinton-based Cabela’s Masters Walleye Circuit team tournament. All of the pro anglers know decisions must be made much earlier this week on techniques for catching the biggest walleye, and where that was most likely to happen.

“When June rolls around on Lake Erie, there is no doubt we’ll be catching lots of nice walleye,” said tournament veteran Scott Geitgey, 45, of Canton. “The big questions will be where the trophy walleye are feeding, how far we’ll have to run to fish for them, and if weather will be a factor.”

Mother Nature isn’t promising calm waters or dry weather. While tons of walleye are being caught around the Western Basin lately, fewer big walleye have been reported. The hot spots lately have been to the east around Lorain and Cleveland.

The tournament fishing boats are all high-powered machines, so 50- and 60-mile runs to deeper waters in the hopes of catching big walleye will be an option.

The two-angler teams will blast off each morning from the mouth of the Portage River. The daily weigh-ins will be held at the Jefferson Street Pier in downtown Port Clinton beginning at 3 p.m. After Friday’s weigh-in, a Youth & Family Fishing Clinic will be held, with the first 50 kids receiving a free rod and reel combination.

“If you want to catch a lot of walleye, Port Clinton is a great place to do it,” said Geitgey, a property maintenance manager for his family’s rental properties in the Canton area. “I grew up fishing the Port Clinton area, and know it like the back of my hand.”

His parents had a cabin near the Marblehead Lighthouse, where he caught his first walleye in 1978 from a little MFG tri hull boat. Geitgey was hooked, and tournament fishing became his passion.

A pro staffer for Ranger Boats, Geitgey and partner David Kolb of Bay City, Mich., finished in an MWC tournament tie for the win with Ohioans Dan Johnson and Larry Rhoads with 23 pounds, 3 ounces on the Illinois River. They were delegated second after losing the tiebreaker, catching one less walleye.

Geitgey was a Lake Erie Walleye Trail points champion a couple of times, grabbed sixth place in an FLW Walleye Tournament in Port Clinton and has finished in the top 10 at a pair of Cabela’s National Team Championships. He was the Ohio champion three years ago at the Cabela’s MWC Championships.

“Everyone fishing this tournament would rather be in Port Clinton in April or early May, when the tournament weight records get set right after the spawning season,” he said. “And while a long run to troll for trophy walleye is a possibility, it’s not in my nature. I don’t like to spend so much time traveling that I haven’t got the time to focus on the fishing, especially if the weather goes bad.

“In Steve Carlton’s Fish Huron Walleye Tournament, which used to be held in the fall, a lot of guys ran all of the way to Fairport Harbor or Geneva,” he explained. “My partner and I won that tournament twice, and each time we caught our best fish about 10 miles from the Huron River weigh-in.”

Geitgey is known for his trolling skills for catching walleye, but he said this week he may return to his early years and cast for walleye in “skinny” waters. Geitgey is hoping the big winds don’t blow, keeping the near-shore waters clear and the walleye friendly.

“If you’ve got tight pockets of big walleye you’re trying to catch, casting is the way to do it,” said Geitgey. “You can more easily stay on those fish. And while there aren’t quite as many trophy walleye around Port Clinton, there are some big ones still roaming the Western Basin shoreline and the Lake Erie Islands.”

The Port Clinton MWC event is the fifth in a series of eight Cabela’s tournaments, and anglers are chasing a berth in the 2020 MWC Championship to be held Oct. 8-10 on the Mississippi River out of Quad Cities, Ill. They will also be chasing a $10,000 to $15,000 jackpot this week in Port Clinton, depending on the size of the tournament field.