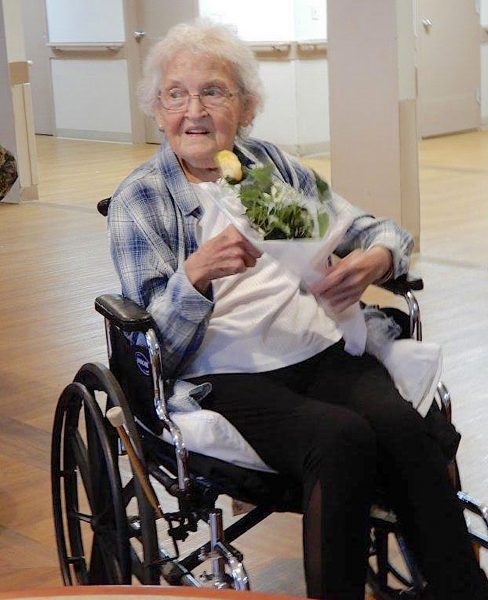 Local TOPS members presented Penny Milliser with a yellow rose bouquet, a KOPS numeral for 12 years and many congratulation cards at Edgewood Manor Care Center, where she was recuperating after a surgery.

Penny Milliser, a long time TOPS member, was surprised when several members of the Port Clinton Chapter 1487 of TOPS showed up at Edgewood Manor Rehabilitation and Health Care Center recently, where Penny is currently receiving rehabilitation following surgery. The occasion was a card shower honoring Penny for 12 years of maintaining

her Keep Off Pounds Sensibly (KOPS) status.
When a Take Off Pounds Sensibly (TOPS) member joins TOPS, they get a weight goal from their healthcare professional based on current health, age and other factors. The member then works to lose weight to meet that goal. The goal remains in effect unless a new goal slip is decided upon by the healthcare professional and the member. It may take a few weeks, a few months or a few years to reach that goal.

Then the member is registered with TOPS Club, Inc. as a KOPS member and has a 10-pound leeway to stay within. Every year on that anniversary date, the KOPS member is honored for that achievement.

Penny originally joined TOPS in January 1983. She was a member of TOPS 1531 of Port Clinton until October 2016, when she transferred to TOPS 1487 of Port Clinton that meets at the Catawba Township Community Hall on Catawba.

Penny has held several offices, including leader and weight recorder and remains an active member by encouraging other members and presenting programs. She always makes something special for all the members for each holiday. Penny carefully monitors her diet and her weight to stay where she needs to be.

After the initial surprise, Penny was presented with a yellow rose bouquet, a KOPS numeral for 12 years and many congratulation cards. After several photos, the TOPS members held a meeting so Penny was able to participate.