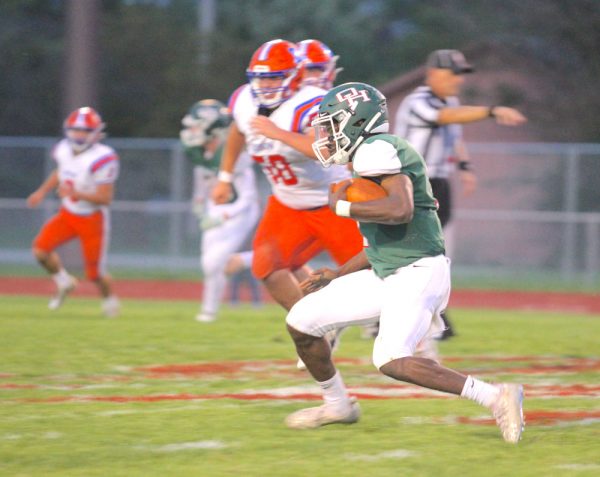 The Rockets’ quarterback Jaqui Hayward (7) scampers for a few yards against Edison. (Photo by Julie Overmyer)

OAK HARBOR — In the end, Edison made one more play than Oak Harbor did on Saturday, after a Friday night weather delay, but the Rockets caught a tough break as well.

After both teams scored touchdowns in overtime on Saturday, the Chargers (4-4, 2-1 Sandusky Bay Conference Bay Division) converted on an extra point after they had blocked Oak Harbor’s previous PAT attempt to win, 21-20.

Oak Harbor (4-4, 1-2) scored the first touchdown of overtime on an 8-yard run by Dalton Witter, but the extra point was blocked, and Edison had momentum.

The Chargers, facing a third-and-1 at the Rocket 11-yard-line, fumbled the ball on a rushing attempt, which was recovered by Oak Harbor, but the officials ruled the runner down. On the next play, Edison quarterback Marcus Medina ran for a 5-yard touchdown to tie the score. Nick Strecker’s successful extra point sent the Chargers into a frenzy.

“It was a bad break for us because it was clearly a fumble. Hayden Buhro made a great play by ripping the ball out while the ball carrier was still running,” said Oak Harbor coach Mike May. “I feel bad for our kids because we made the stop on defense that we needed to win the game, but it didn’t count.”

Following the weather delay on Friday night, the game resumed at 11 a.m. on Saturday with Edison facing a second-and-5 from the Oak Harbor 45-yard-line with 1:46 to play in the second quarter, holding a 14-7 lead.

The Chargers got two first downs and advanced to the Oak Harbor 16, but the Rockets held firm and stopped Edison on fourth down on the final play of the first half.

Edison used its rushing attack to control the clock and the tempo of the game as it built a 7-point lead over Oak Harbor at halftime. As a team, the Chargers rushed for 312 yards.

“I was disappointed in the mistakes that we made on Friday night during the game, but I was very proud of the effort our players gave on Saturday morning,” said May. “Unfortunately, we dug ourselves too big of a hole on Friday night to recover.”

Edison took the lead when Hunter Cassel scored on a 12-yard touchdown run with 10:09 to play in the first half. Strecker’s PAT made it 7-0.

The Chargers drove 74 yards in 10 plays and pushed the lead to 14-0 on a 1-yard touchdown run by Marcus Medina with 4:06 to play in the second quarter.

Edison got the ball back and started from its 32, but Marcus Medina’s pitch was deflected and caught in midair by Rocket defensive back Hayden Buhro, who returned it 32 yards for a touchdown to get Oak Harbor on the board. Cade Petersen’s extra point cut the deficit to 14-7.

The Rockets tied the score at 14-14 with 5:58 to play in the third quarter when Jaqui Hayward found Buhro for a 43-yard touchdown. The ball was slightly under thrown. Burho leaped over the defender to catch the pass and waltzed the remaining 15 yards for an Oak Harbor touchdown.

“Give credit to Oak Harbor. We had good momentum (from Friday), but it didn’t carry over because of what Coach May and his staff did,” said Edison coach Jim Hall. “They responded and took away a lot of what we were successful with on Friday.”

The delay seemed to help the Rockets a little bit.

“We made some adjustments from Friday night to Saturday morning,” said May. “Our defensive players did a good job of executing the adjustments and played well enough to give us a chance to win the game.”