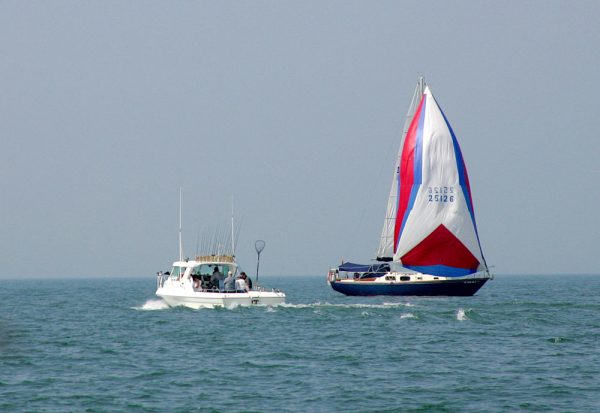 The drift-and-cast Lake Erie fishing charters are in full swing this year, and boaters must be courteous on the water in order to accommodate the crowds.

Fishing absolutely cannot get any better than what it is right now.

This past week the drifting charters, trolling charters and head boats have efficiently been getting limits of walleye. As I am trying to do each week with this report, I want to talk about how exciting casting for walleye is right now.

In the 1980’s almost everybody that was fishing for walleye was subscribing to the traditional drift-and-cast mode. That’s how they caught their limits. More guys started to move to trolling, though, once the bite slowed as filter-feeding zebra mussels increased the water clarity and made walleye fishing more difficult.

The population of walleye that we have now could be the greatest of all times. With huge schools of hungry walleye now the norm, casting for a limit of walleye is fabulous.

We have one of the few lakes that you can go to and cast for walleye and catch them, and sport anglers are out on Lake Erie to enjoy the fun of light tackle fishing for big walleye.

The packs of boats that are drifting for walleye have focused on the waters north of D Can and North of Niagra Reef in about 30 to 32 feet of water, which have been producing limit catches. Its no secret that keeping your bait up in the water column from the surface to about 10 feet down has been working best.

While casting, use a ¾-ounce sinker, a 2-foot to 3-foot leader with Weapon spinner rigs tipped with a half of a nightcrawler. Start with a splash count, letting the rig sink for about six to seven seconds before starting a slow wind back. North of Kelley’s Island some bigger walleye are being caught, but the numbers are down limit wise.

This also applies to those out trolling in the same areas. Like I have stressed in past reports, trollers have the advantage because they can move around. But if you see a cluster of fisherman that are casting, stay away from them.

The lake is big enough that trollers can move around casters. The best baits to use while trolling are Tru-Trip diving planers and Yuk or Stinger spoons that are set 30 to 50 feet back. You are going to want to keep your speeds between 1.8 and 2.0 miles per hour.

As the summer season kicks off always remember: Be safe, have fun and be courteous of other anglers and boaters. Keep a tight line!