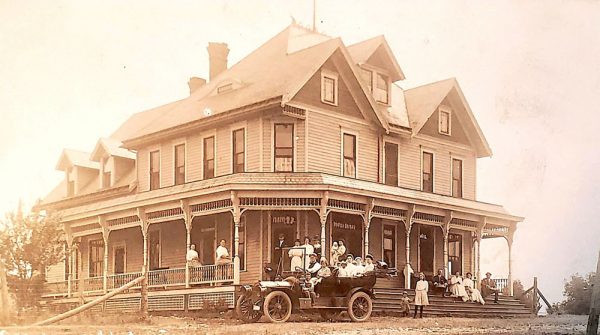 A photo of the 1909 Ruh/Cangney House Hotel on Water Street before being named the Cliff House Hotel.

Catawba Museum at Union Chapel depends heavily on a corps of 15 to 20 volunteers called Docents. The name is derived from the Latin word “docere” which means “to teach.” The most important part of their work is accurately answering the questions visitors have about the island’s past.

This year, two tours were arranged to show the Docents 52 sites that are linked to the growth and development of Catawba Island. A van and driver provided by the Catawba Island Club has begun in what was once Ottawa City and circumnavigated the Island.

Dr. Richard Thomas, a Trustee of Catawba Island Historical Society, which operates the Museum, will narrate the tours scheduled for the morning and for the afternoon.

“In addition to dates, names and other hard facts,” said Dr. Thomas, “the tour will include a lot of colorful anecdotes provided to the Museum by our friend and late Emeritus Board member, Don Rhodes. A year ago, we drove Don around on much the same route the tour will take and recorded many of his recollections. He had a remarkable memory!”

Example topics and points of interest on the tour will include early hotels like the Cliff House that once catered to the wealthy, Sandusky Cement Company and its lime kiln, three early island wine companies, Rosie Pascal the “golfer,” and Sunnyside Tower. The connection of the Gem, Twin and Terrace Beaches will be explained. The origin of landmark communities like the Cliffs, Little Pittsburgh and Orchard Beach will be discussed.

“We want our museum docents to internalize the Catawba Island story,” concluded Thomas. “It is one thing to explain something you have read about, and something altogether different when you have been on the exact spot where a subject building stood or an event occurred. The tour should help make that distinction.”

Catawba Museum at Union Chapel opens for its fifth season on Saturday, May 14. Opportunities to become a docent are still available. For more information call the museum at 419-967-5363.

Operation of the museum depends heavily upon dues from membership in the Catawba Island Historical Society. An application to become an annual or lifetime member can be obtained at www.catawbaislandhistoricalsociety.com.