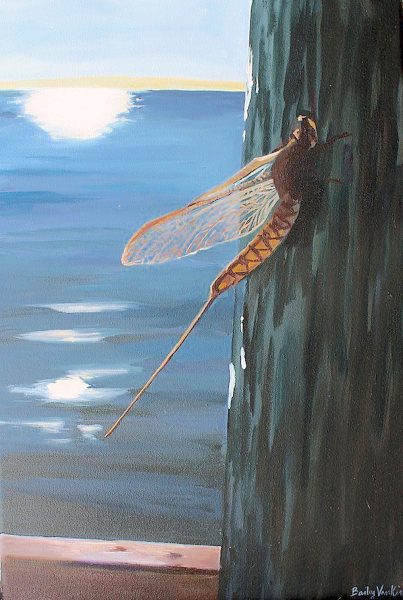 Mayflies might cause some folks to grumble, but not Bailey VanKirk, a local artist who attended Danbury High School and received her art degree from Kent State University. VanKirk loves the annual arrival of the mayflies, and enjoys creating images of her favorite insect while painting in oils.

Back in 1996, I discovered why Port Clinton officials often turned off their downtown street lights at dusk when June rolled around.

I came rolling into Port Clinton way back then to edit a monthly publication called The Outdoor Beacon for Publisher John Schaffner. It was a hunting and fishing magazine created by the late Lowell Wodrich and a companion at the time to Schaffner’s The Beacon, which is still a mainstay of Ottawa County.

I was driving a small, white convertible with the top down, and as I meandered along Perry Street, I had one thought.

“This town stinks,” I remembered.

June is mayfly month on the Lake Erie shoreline, and mayflies love the bright lights of this small city. They only live a couple of days after emerging from the bottom of Lake Erie, barely enough time for their short breeding cycle. But long enough to coat vehicles and buildings, especially when a light is shining nearby.

They are lured ashore by the bright city lights in June and early July, often helped by northerly winds. There can be so many mayflies hatching on any given night that they often show up on radar, like storm clouds.

This week, the warnings are already out. The Port Clinton street department is ready to turn off individual city street lights during the heart of the Mayfly hatch. Businesses, stores, parking lots and residences have been told to do the same, but sometimes forget it and regret it.

The 1996 hatch in Port Clinton was special. The mayflies were so thick on city streets that snow plows were used to push the spent bugs into great piles and city workers took away 97 truckloads of them.

The fishy smell remained for days.

While some curse the proliferation of the bugs a couple of weeks each year, mayflies have no mouths. They don’t bite. And after they emerge, hatch, mate and deposit eggs, they die.

The aquatic insects are also special snacks for the walleye, yellow perch and smallmouth bass swimming in Lake Erie, a reason why the local fishing slumps a bit during the mayfly hatch.

The female Hexagenia can deposit up to 1,500 tiny eggs before her demise, which will slowly sink to the bottom of Lake Erie and burrow into the rich sediment, feeding on algae. They’ll slowly grow until it is their time to hatch in a couple of years.

Lake Erie fans should celebrate this magical marvel. A vibrant mayfly hatch is the sign of a healthy Lake Erie. Mayflies can’t live in the “dead zones” created by dying algae that sinks to the lake bottom after fertilizer-fueled harmful algal blooms.

Mayflies had all but disappeared from Lake Erie in the 1960s, but have made a startling comeback over the last 30 years with help from the Environmental Protection Agency and Clean Water Act.

Fisheries biologists also believe the bugs have been very beneficial in recent years for the yellow perch population. With the walleye schools at record highs right now, the perch have been pushed from their near-shore haunts to deeper water by the hordes of walleye. That seems to be where perch suspend and feast on mayfly larvae and a myriad of other invertebrates.

The mayflies are also an amazing buffet for local birds, frogs and other insects.

A sure sign of the size of the walleye hatch will be the windrows of mayfly hulls all along the Lake Erie shoreline. The hulls are left behind by the hatching mayflies, and are so numerous that I have had them block the water intake on my boat after motoring through a few miles of them.