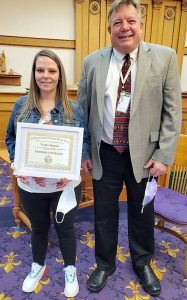 Leighia Havens celebrated her graduation from the Mental Health Court of the Ottawa County Court of Common Pleas last week, a program that successfully graduated six people in 2020.

Havens expressed interest in the Mental Health Court while struggling with multiple legal issues caused by her addiction and mental health. She identified a need for help in maintaining her recovery and stability.

Program participants, staff and community members expressed their pride in Havens completing the program and offered congratulations for her achievements and progress.

“Recovery isn’t easy. Using is easy. Recovery is the hard part,” said Havens. A supporter told Havens that “you’re a good mom. I knew you were going to be fine because that’s who you are.”

The program provides an alternative track in the criminal justice system and offers additional support and services. An attendee thanked the court, stating “This program, they take a person and they don’t just say do this. They help. If you trip, they pick you up.”