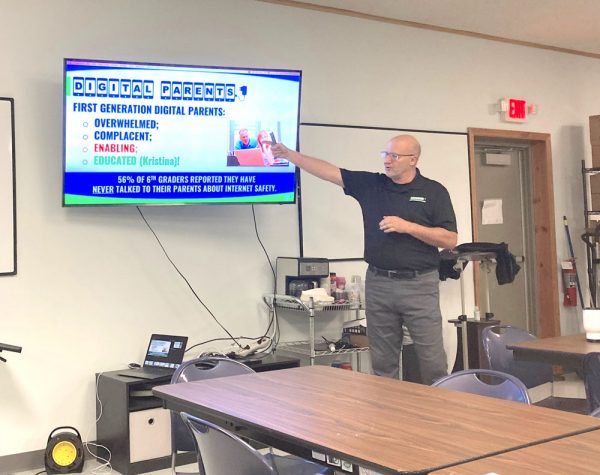 No parent wants to see their child abused. That doesn’t mean, however, that someone evil will not secretly try to abuse an unsuspecting girl or boy who is using the internet.

Scott Frank, of the Digital Empowerment Project, brought that fact home to a small crowd recently gathered at the Ottawa County Advocacy Center. Frank is a 40-year veteran of law enforcement and an 11-year undercover agent tracking online abusers of children.

“Our children want affection, have a need to belong, and crave recognition,” said Frank. “If they don’t get it at home they can, and will, get it online.”

Frank’s mission is to have parents, grandparents, teachers, pastors – anyone in a child’s life – understand the digital impact the online world can have, and avoid risks present every day on the internet.

Frank was a former D.A.R.E (Drug Abuse Resistance Education) agent speaking to students about the use of controlled drugs, membership in gangs, and violent behavior.

“After one meeting, a 6th grade girl came up to me crying,” he said. “She told me she was in an online relationship with a guy, and was being pressured to send him nude pictures of herself. She had no clue what to do.”

Because of that story, Frank became an undercover agent, posing as 11- to 15-year-old boys and girls to catch online perverts.

“Half of your kids are in some type of online relationship without you knowing it, but the answer isn’t taking it (the internet) away,” counseled Frank. “Ensure that your kids fulfill their social needs in a positive way, or someone else will.”

“The words and pictures your child posts have consequences offline. Your children’s profiles can be seen by a broader audience then you – or they – are aware of. Once they post it they can’t take it back. This online information can be used to initiate conversation, or even approach your child in what would appear to be a friendly manner.”

Phone apps like Snapchat, TikTok, and WhatsApp allow users to take and share photos and videos. The apps can also let people see your location. These apps generally have “very limited privacy controls” said Frank, and users can be exposed to cyberbullying and explicit content.

Pedophiles exploit Instagram’s comments to network with each other and fish for victims via the use of #hashtags.

For example, your teenage daughter takes a photo at the beach, and attaches the hashtags #teenmodel and #snapchat to the photo. This allows that photo to show up in front of millions of teen girls. But #hashtags also allow predators to contact your child whenever they want. That 15-year-old boy your daughter is dating online in Georgia can, in reality, be a 70-year-old pervert living just down the street.

Your tech-savvy child can easily find out how to access any, or all, of these services. Frank noted that an internet search of the words “Naked Women” returned more than 26.8 million hits for “pornography.” The average age for a child to be exposed to pornography is now 8 years old.

“Pedophiles have their own dark web,” said Frank.

Monitoring tools like Bark and Covenant Eyes allow parents to monitor their children’s smartphone social media and texting activity. Don’t allow electronic devices to become babysitters, though, and be sure to turn off Direct Messages (DMs) from people they aren’t following.

If you want to find out how to protect your children from the dangers of online abuse, wish to learn more on the subject, or have Scott Frank of Digital Empowerment Project speak at your event or to your group, go to www.digitalempowermentproject.com. The pamphlet “Net Cetera: Chatting with Kids About Being Online” at www.onguardonline.gov/blog/new-net-cetera-hot-press is also an excellent guide.