A unique waterfowl hunting skiff once common on Lake Erie and Sandusky Bay has been restored to period authenticity and will be featured this year in the new Sportsman’s Display section at the Catawba Island Historical Society’s Union Chapel Museum.

The Union Chapel Museum made its debut last June in the 140-year-old Union Chapel on East Porter Street at the north end of Catawba Island. The beautifully-detailed museum is open seasonally, and is expected to reopen to the public in May. The Sportsman’s Paradise display will be just one of many fresh topics planned for 2019.

Jim Ebel, of Oak Harbor, recently finished restoring period authenticity to the turn-of-the-century duck boat so that it could become part of a new hunting and fishing exhibit at the museum. The boat was donated to the Museum by local entrepreneur Bob Snyder. Bob’s wife, Linda, is on the Society’s Board of Trustees.

Duck boats or punt boats, the small craft are shallow water vessels propelled with a long paddle or pole. Usually sporting green painted hulls to blend with marshland grasses in the Sandusky Bay and Lake Erie region, the boats have been used for centuries to pursue the abundant winged game of our lakes, rivers and estuaries. This particular boat not only plied the waters around Catawba Island, but it was once used at the famed Winous Point Shooting Club on Sandusky Bay, the oldest waterfowl hunting club in the United States.

Jim Ebel is the son of Bill Van Der Giessen, Vice President of the Historical Society. He recruited his father, and friends Vince Lathrop and Mark Medina, to spend three hours on Saturday, Feb. 16 securely mounting the boat to the museum ceiling above a wall display panel titled “Catawba Island:  Sportsman’s Paradise!”

The boat is inverted so museum visitors can look overhead to check out  the typical items a duck hunter would have brought along while pursuing the area’s feathered fowl. Items positioned inside the boat will include an antique shotgun and spent cartridges, hand carved decoys, a wooden bucket filled with corn kernels, a kerosene lantern, and a jug that could have helped fend off the late afternoon chill!

According to Craig Koerpel, President of the Historical Society, “Most of last year’s exhibits about the area ice harvesting industry are being replaced with a Timeline Tale of Catawba Island from its geological birth to present day. New subject matter will include migration to the area, early contact between Native American and non-indigenous settlers, and subsequent milestones marking our transition from isolation on the fringe of the Black Swamp to agricultural fame and a renowned recreation Mecca.”

There is no charge to visit the Catawba Museum at Union Chapel, nor to attend speaking events included in the Historical Society’s Cultural Lecture Series. These activities are primarily underwritten by dues from joining the society. Its annual campaign for new and renewed memberships is currently underway.  More information is available at www.catawbaislandhistoricalsociety.com 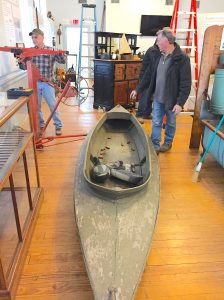 A new attraction in 2019 at the Catawba Island Historical Society’s Union Chapel Museum will be the “Catawba Island:  Sportsman’s Paradise!” exhibit. Featured will be this unique waterfowl hunting boat once used at the exclusive Winous Point Shooting Club on Sandusky Bay. Jim Abel, left, who refinished the boat and Vince Lathrop get it ready to hang fromt he museum ceiling. 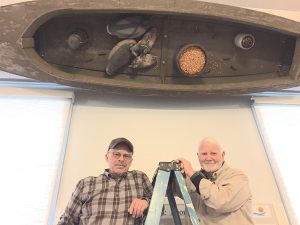 To maintain authenticity of the waterfowl hunting craft, or punt boat, to be featured this year at Catawba’s Union Chapel Museum, Jim Ebel, left, and his father Bill Ven Der Giessen, outfitted the duck boat with period hunting gear. That included decoys, an antique shotgun, corn for baiting waterfowl and a traditional jug of spirits.