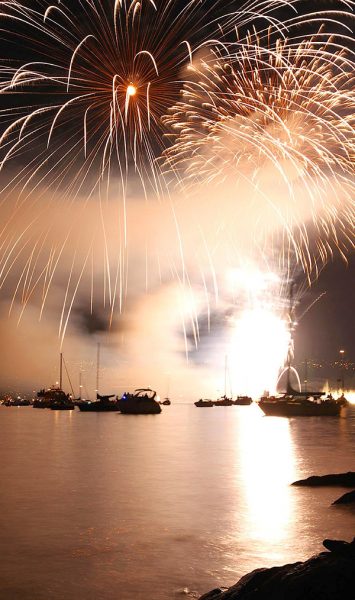 Lorain County’s 80-member Patriots Band will kick off Independence Day’s evening celebration in Put-in-Bay with a free concert on the lower plaza of Perry’s Victory and International Peace Memorial on Thursday, July 4, at 6 p.m. The Patriots Band will play a selection of patriotic music and selections from the Music Man during the 90-minute concert.

“The staff at Perry’s Victory and International Memorial is excited to host the Patriots Band,” said Supt. Barbara Rowles. “They have been compared to an old-fashioned hometown band playing at a community picnic.”

The Fourth of July is always a busy day at the National Park, said Rowles. Rangers work extra hours to assist people parking on park property to watch the evening fireworks display and work a special event on the park’s Observation Deck hosted by its Friends Group, the Friends of Perry’s Victory (Perry Group).

The Put-in-Bay business owners and Friends of the Bay sponsor the annual 30-minute fireworks display. Fireworks will begin at dark on July 4. The fireworks are shot from a barge in Put-in-Bay’s downtown harbor in front of the Memorial Column, said Rowles, and hundreds of visitors view the fireworks from the grounds of the National Park.

The Perry Group will host a special event on the Observation Deck to view the fireworks, she added. The fundraiser will help generate capital improvement funds for projects such as waysides and elements that cannot be funded with federal money. For more information about the Perry Group, its mission and its event schedule, visit friendsofperry.org.

The Oak Harbor Chamber of Commerce will host its popular Independence Day Celebration a little early, as it has for many years, taking the early holiday spotlight with plenty of festivities on the Mill Street Riverfront on Wednesday, July 3.

Lead singer Mike Barr and Haywire, a local country band, is featured at a free concert from 7:30-10 p.m. The Royal Duck Race will follow at 8 p.m., before the big fireworks show. There will be also be Journey’s Giant Inflatables on the Portage River, the Cruz’n Nights Car Show, beverages at the Chamber of Commerce tent, and food concessions on the Riverfront.

Bring the squirt guns for Star-Spangled Run on July 4

Run or walk along Lake Erie through scenic Port Clinton while being refreshed with gentle blasts of water from squirt guns during the annual Star-Spangled Squirt Gun Run on Thursday, July 4.

Registration for the 5K race is at 8 a.m. at the blue canopy at the Jefferson Street Pier. The race begins at 9 a.m. with awards to follow at 10:30 a.m.

Refreshments will be served following the race. For information, contact Roseann Hickman at 419-308-4690.

The race is a benefit for the Port Clinton Women’s Club’s scholarship fund. Each year, the club awards at least one scholarship to a Port Clinton High School senior and to an adult woman in the community furthering her education.

The Port Clinton Women’s Club is a non-profit organization that completes projects and raises funds for programs benefitting the local community.

The Ohio Flags of Honor will visit Port Clinton to pay tribute to the 301 Ohioans who lost their lives in military service during the War on Terror since 9/11. The special traveling memorial will wave its flags at Waterworks Park in Port Clinton on July 4 through July 7, reports Rob Ward of Port Clinton, who is signing up volunteers to be Sentinels of Honor for the event.

The volunteer Sentinels of Honor are required to stand watch over the memorial from the event’s Opening Ceremony at 5 p.m. on Friday, July 4 until the closing Ceremony at 2 p.m. on Sunday, July 7.

Sentinels of Honor volunteers are asked to sign up for 2-hour shifts. Anyone signing up for two consecutive 2-hour shifts, in essence a 4-hour shift, will receive one weekend general admission pass to the Rock the Light Music Festival in Waterworks Park on Sept. 6-7.

To sign up to be a Sentinel of Honor visit volunteer signup.org/CJLA9

The Fourth of July Port Clinton Fireworks Celebration Committee is again holding annual events, including contests such as Firecracker Cuties, Jr. Miss, Miss, Mrs., Mr. and Most Photogenic. All proceeds from application fees will go to Port Clinton’s budget for the lakefront fireworks display held on July 4.

Contestants are asked to wear their best red, white and blue outfits, anything from casual to dressed up. The contest will be held July 4, 1 p.m., Trinity Methodist Church, 135 Adams Street, Port Clinton. Registration begins at 12:15 p.m. that day. There is a discount for those pre-registering, and the contest is open to all counties, states, ages, and genders. Every winner and runner-up will walk away with a crown or prize.

The photogenic contest will be held prior to July 4, and winners will be announced at the July 4 contest event. Those entering the photogenic contest must pick up an application at the Ida Rupp Public Library; Port Clinton Chamber of Commerce; Port Clinton, Sandusky, and Danbury City Schools; Mary’s Blossom Shop; The Exchange (Sandusky); Coffee Express; The End Zone; Star Lanes Bowling Alley (Port Clinton); Truth Ministries Resale; Clean Scene Laundromat (Port Clinton); Lilly & Gert’s; Be-You-Tiful Salon; and Northern Exposure Candle Company. A printable application is available on Facebook: “Port Clinton Area 4th of July Celebration.” The deadline for the photogenic contest is June 30, and the fee is $10 (also open to all ages/genders/locations).

Lakeside Chautauqua’s Fourth of July celebration begins at 10 a.m. Thursday, July 4 with the popular Children’s Bike Parade departing from Perry Park. Participants of all ages should arrive early along the lakefront path with an already-decorated bike.

In advance of the bike parade, families are encouraged to designate a place for children to find their parents after they’ve finished passing through the parade.

Following the bike parade, around 10:15 a.m., will be Lakeside’s unique Fourth of July Parade with decorated golf carts, antique cars and other floats. Both parades travel west on Second Street and occur come rain or shine.

This year’s float parade Grand Marshal will be the Rev. Irwin Jennings and his wife Janet. Irwin served as the former Dockside Service Minister and as chair of the Lakeside Board of Directors. Janet served as President of the Lakeside Women’s Club and supported has the Dockside Worship Service over the years.

Enjoy a taste of summer at the Fourth of July Cookout from 11 a.m.-3 p.m. on the Hotel Lakeside lawn. The menu includes BBQ ribs or chicken, potato salad, baked beans, chips and cookies.

The Fourth of July festivities continue with live music from 12:30-7:45 p.m. at the Pavilion and the Steele Memorial Bandstand/Gazebo. Performers include JK All Day, Matt Jergens, The Adjustments and Juggernaut Jug Band.

Other activities available throughout the day include shuffleboard, miniature golf, shopping and dining.

Crew members from the Danbury Township Volunteer Fire Department will be available from 7-9:30 p.m. on July 4 in Pavilion Circle for a ‘Touch a Truck’ event. This event allows children to explore the fire trucks and learn about the work they do.

Around 9:45 p.m., fireworks will offer a spectacular finale to the holiday. A barge will launch fireworks near the north end of the dock, weather permitting. Watch for signs at the Pavilion about dock closure for the day.

In the event of inclement weather, the fireworks will be moved to Friday, July 5.

There will also be a special showing of “Avengers: Endgame” (PG-13) at 11 p.m. in Orchestra Hall. For more information about Lakeside’s Fourth of July festivities, visit lakesideohio.com/calendar. Purchasing a Daily, Friday, Saturday or Season Chautauqua Pass includes admission to Lakeside Chautauqua.

To park on the grounds, a Daily Auto Pass is required. Limited parking is available within the gates for $12.50 per day or the South Gate Parking Lot for $6.50 per day (complimentary shuttle service available). Parking at the nearby Danbury School Parking Lot is $2 per day (no shuttle service and limited parking dates based on school schedule). Purchase Chautauqua Passes in advance at www.lakesideohio.com/admission or upon entering the gates of Lakeside.

7 ways to survive Fourth of July on the water

Each year about three out of four recreational boat owners say they plan to enjoy the Fourth of July holiday aboard the family boat. With nearly 12 million registered vessels in the U.S., that could spell mayhem at launch ramps, marinas and popular anchorages, requiring extra skill, patience and courtesy.