Van Wert’s offensive attack too much for Port Clinton, 46-20 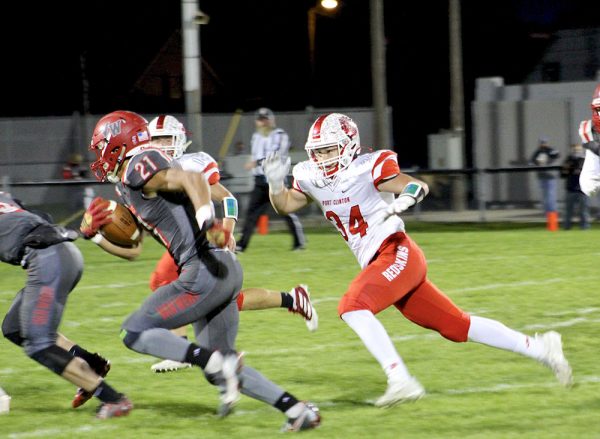 VAN WERT — Port Clinton found out the hard way just how good Van Wert is, falling 46-20 to the Cougars in the second round of the Division IV, Region 14 playoffs.

Van Wert quarterback Owen Treece, one of the top players in the state, had an amazing performance, accumulating 413 yards of total offense and scoring seven touchdowns. Treece completed 21-of-27 passes for 292 yards with four touchdowns and two interceptions and ran 17 times for 121 yards and three scores.

Treece threw three touchdowns in the first quarter and ran for another in the second quarter as the Cougars (6-1), seeded fifth in the region, took a 25-0 lead into the half.

“It was obvious who the best player on the field was, and it’s not even close. We certainly never stopped him, or slowed him down,” said Port Clinton coach Beau Carmon. “They were able to do what they needed to do whenever they wanted to do it.”

Treece connected with Dru Johnson on two touchdowns (34, 25) and Connor Pratt on a 68-yard score in the first quarter as Van Wert took an 18-0 lead. Treece later scored on a 9-yard run in the second quarter to give the Cougars a 25-point lead at the half.

“That was the mostly mental errors, particularly on the defensive side of the ball, that’s the most frustrating thing. They’re a great football team. If we play them 10 times, I don’t know how many times we beat them. Their skill kids were better than our skill kids,” said Carmon. “We were inside the 5-yard-line twice and came away with nothing. We’ve done that at times this year. Defensively, we were non-existent. I certainly expect us to bounce back. 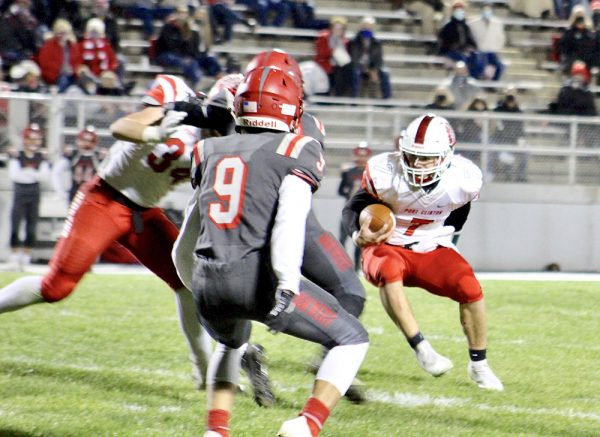 Cam Gillum (7) dodges tacklers as the Redskins tried to catch high-flying Van Wert in the second round of the Division IV, Region 14 playoffs. (Photos by Madeline Recker)

“They were stronger than us, faster than us, they didn’t miss tackles, they din’t blow coverages. They were better than us in all three phases of the game. We had some bright spots on offense and on special teams, but that’s not going to cut it. It’s been a while that we’ve seen a team like that with that type of offense. It’s comparable to what we saw when we played Tiffin Columbian in week one. When you make the playoffs, you’re going to face great teams.”

The Redskins’ first touchdown came when Cam Gillum, who completed 17-of-22 passes for 224 yards and three touchdowns, connected with Garrett Cornell on a 6-yard score with 6:30 left in the third quarter. Gillum later hooked up with Owen Auxter on a 7-yard touchdown and hit Jonah Sidney for a 22-yard touchdown late in the fourth quarter.

Despite the loss, Carmon was able to find something of a silver lining.

“It was a great experience for us,” he said. “Now you see a team like that and you know what it takes to make a deep playoff run. We’re not there yet, but we’re going to be.”

“We’re going into week nine and we’ve got three weeks left,” said Carmon. “We’ve got to look like more of a veteran football team.”