Local military veterans received a special early Veterans Day treat on Saturday, Nov. 6 with a delicious feast prepared by noted pay-it-forward restaurant Bistro 163 of Port Clinton. Through the generosity of Al and Diane Hawk, Bistro 163 served dinners of pulled pork and beef, potatoes, corn casserole, and many wonderful tasting desserts to local military heroes to thank them for their service.

The dinner was held at the Jet Express Island Port Bar & Grill facilities, a truly beautiful place with vaulted ceilings and glass windows overlooking the nearby Portage River in Port Clinton.

Said Mary Caracci, from Bistro 163, “Diane Hawk approached us with the idea, and gave us the opportunity to serve the meal. We wanted to start the week of Veterans Day with a complimentary dinner.”

The Hawks have a daughter serving in the Army, and looked for a way to honor her, as well, while acknowledging America’s often forgotten warriors. The meal was the Hawk’s way of giving back to those who have served our Nation in war or peace. 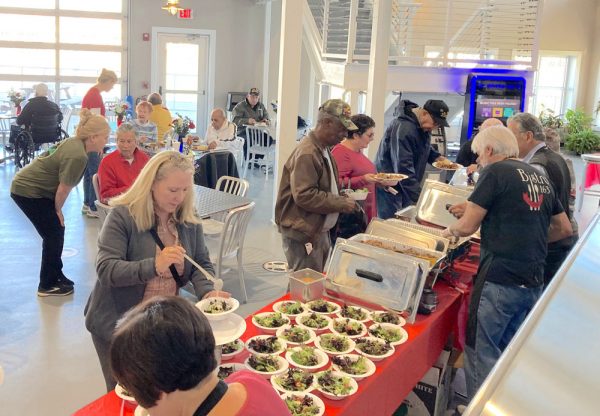 An appreciative crowd gathers at the Jet Express Island Port facility in Port Clinton for a special Veterans Day meal.

“We have worked with the veterans in Fremont and around the country for many, many years,” said her husband, Al Hawk. “We got involved with Camp Valor in Kansas City. When they had shooting matches at Camp Perry they would bring wounded warriors in. They needed financial help and we decided to help.”

The Hawk’s have been involved for many years with the Fremont VFW and their community Thanksgiving, assisting on Thanksgiving morning and serving meals to the less fortunate. Port Clinton is Diane Hawk’s hometown, and they wanted to do something for the vets here. The idea of a meal was developed into the Veterans Day event.

“It’s kind of special for us,” said Al Hawk, “because we have a daughter, a 2nd Lieutenant, who is on first time active duty in the Army. We also wanted to do something special for the veterans coming out of the pandemic.”

Members of the Port Clinton High School Leadership Council volunteered to assist, carrying trays of food for vets, and running for refills of coffee and water. The four young ladies in attendance – Nora Bodie, 15, Alliyah Wharton, 16, Alexa Taylor, 15, and Faith Chapman, 18 – were able to talk and share with many of vets.

The high school volunteers were even introduced to a bonafide hero, Port Clinton’s Lt. Col.(ret) Harold Brown, one of only eight of the famed Tuskegee Airmen of World War II who are still alive. 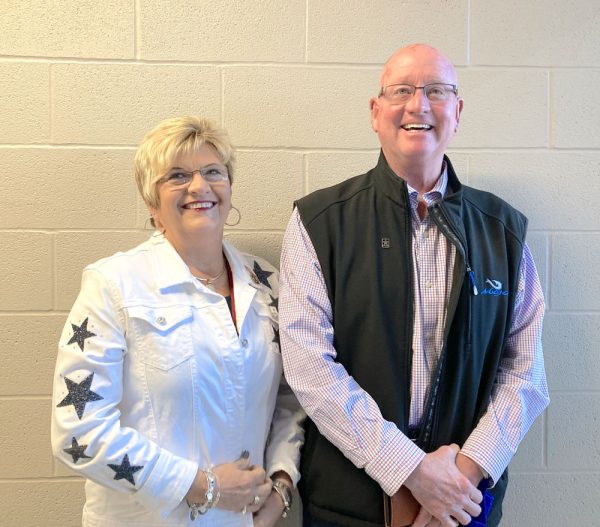 Benefactors Al and Diane Hawk made possible the Veterans Day meal by Bistro 163 with their generosity. (Photos by Phil Wheeler)

Veterans from all branches came to share a meal and swap stories about their time in the service. At 97 years of age, Brown was the oldest vet in attendance. Joe Puda served in the Navy from 1951-53, with time spent on the U.S.S. New Jersey (BB-62), the most decorated battleship in Navy history. Bart Ansbro served in the Army from 1956-59 as a supply truck driver.

Charlie Holbrook was a Submariner, or “Bubblehead” as they are known, from 1970-74. He served aboard the U.S.S Sam Rayburn (SSBN-635), a nuclear ballistics class sub.

Veterans Day is a day to honor all those who served, affirming the legend: “Our flag does not fly because the wind moves it… it flies with the last breath of each soldier who died protecting it.”

A crew of 27 volunteers made it a fun and rewarding day to remember, and Babette Klacik, the chief for Bistro 163, outdid herself, creating a meal worth remembering for all of the veterans and a “Thank You” for bravely doing what they were called to do so we can safely do what we are free to do.