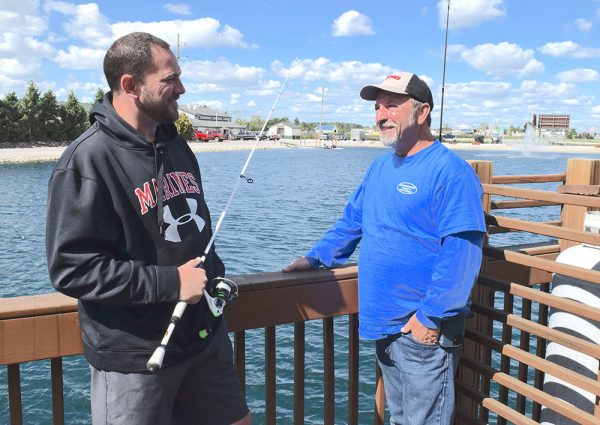 There is almost something magical about the healing waters of Lake Erie, said Gunnery Sgt. Samuel Deeds of Independence, Ky., who was enjoying another fishing adventure this week with Walleye for Wounded Heroes.

“I was pretty badly injured while fighting in Iraq, being blown up twice and consequently having 42 different surgeries to put everything back together again,” said Deeds, now medically retired from the U.S. Marine Corps. “I went to my first Walleye for Wounded Heroes event about six years ago.

“I quickly discovered how Lake Erie and its walleye fishing, and the camaraderie of joining fellow veterans for a few days, could give me a chance to reset myself and relax. It’s such a diverse group of veterans, as well, with guys that fought in World War II, Korea and Vietnam joining those of us who fought in Iraq and the Middle East.”

There is a lot of common ground for the veterans, said Deeds.

“It’s a chance for us to network, and talk about issues like dealing with the Veterans Administration, and with PTSD treatment and options,” he said. “There are so many things that only veterans can really understand, a reason why I’ve made so many good friends at the Walleye for Wounded Heroes events.”

Deeds was assigned to head out on Lake Erie with Mike Robertson, a Lake Erie veteran skipper from Laura, Ohio. The winds of Lake Erie had chased them off the big lake last Friday, so they fished the stocked pond at Bay’s Edge or the catfish waters of Sandusky Bay.

Ron Freeze, Ferd Lohman and Charles Dawson put together this outing after the usual June Lake Erie fishing trip was cancelled by Covid-19 mandates. The four-day adventure included luxury condos at Bay’s Edge, boats and fishing guides, tackle and bait and meals that ranged from box lunches to a banquet at The Que in Port Clinton.

“We’ve all been through a lot, but this event gives everyone a moment to stop thinking about the negativity in our lives, and focus on enjoying the company and catching a fish,” said Deeds. “Half of the charter captains that are taking us out are military veterans, and they give up a day or two of paid charters to graciously take us out.”