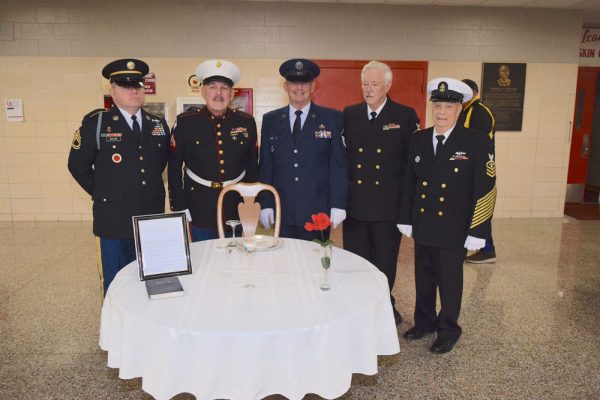 Getting a lot of salutes at the Big Band Dance were the Veterans Color Guard, all in full dress uniform as they surrounded the “Missing Man Table” that honors the veterans who have died in recent years. From left to right are: Ken Bacon of the U.S. Army; U.S. Army Commander Bill Porter of the Color and Honor Guards; U.S. Army Master Sergeant Douglas Moore; and U.S. Navy Chief Petty Officers John Culp and Ed Blind. (Photo by D’Arcy Patrick Egan)

The Big Band Dance had been a chance for local military veterans to gather each year and tell war stories, catch up with old friends and dance to some great toe-tapping music from their World War II era of big bands.

The special event put on by Navy veteran John Culp and Juanita Mills-Persely of Port Clinton had languished a couple of years ago, its long run doomed by the pandemic and a thinning crowd of elderly veterans.

Mills-Persely and Culp, though, weren’t about to let the Big Band Dance disappear. Many veterans enjoyed the music, and the chance to bring together military veterans. They booked the regular band, the “Night Session Big Band,” and the Port Clinton High School Cafeteria for the event, and were rewarded with a surprising crowd of veterans, spouses and friends.

“And we’re ready to do it again,” said U.S. Army veteran Ken Bacon. “We’re already making plans for next year.” 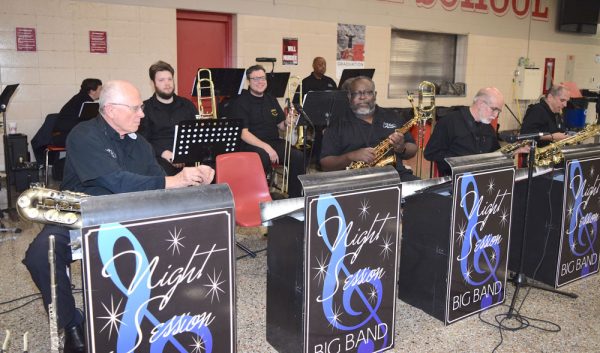 Night Session is made up of a diverse group of musicians from the Northwest Ohio and Southeast Michigan area. No one leaves the dance floor when Night Session is playing, say big band aficionados.