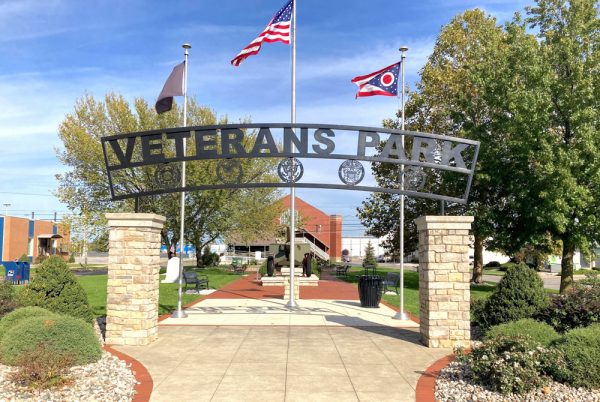 The sign, with our nation’s flag flying in the background, simply says “Veterans Park.” (Photos by Phil Wheeler) 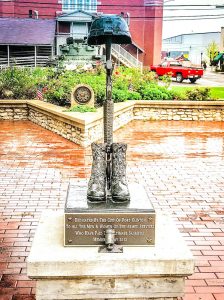 An empty pair of boots, a rifle, and a helmet — the Fallen Soldier Battlefield Cross — stands a silent guard over hollowed ground.

In 1933, a parcel of land was gifted to the City of Port Clinton and the American Legion to create a veterans park. A large archway erected at the entrance says simply “Lest We Forget,” and for 88 years the local citizenry has long remembered.

The small, horizontal block-long park, behind what was then the National Guard Armory, was originally called “The Upper Market Space.” Local farmers would bring their produce there to be sold. This was to be the beginning for what was to become Veteran’s Park.

In 1969, it was announced that the Old Armory would be sold, and it was feared that the park could be lost.

The Port Clinton City Council fought to have the land deeded over to the city and, lead by State Representatives Howard Knight and Ken Thompson, they succeeded. Judge Tom Stahl told the council to condemn the park, if sold, and turn it over to the city. “Let’s not dig up the rose gardens or monuments,” he said.

The park is dedicated to the memory of the 37th Tank Company of the Port Clinton National Guard. At the beginning of World War II, they were inducted into federal service with other state National Guard units as part of the 192nd Tank Battalion. The company, comprised of 42 local men, was re-designated Company C and sent to Fort Knox, Ky., for training.

In 1941, they were deployed to the Philippines to support Gen. Douglas McArthur. Among the 42 men who left Port Clinton, 32 of the brave soldiers were with the unit on Bataan Peninsula when, on April 9, 1942, they were captured by the Japanese.

The men of Company C remained prisoners of war until they were liberated in 1945. Only 10 of the 32 had survived. Company C earned three Presidential Unit Citations during its heroic defense of Bataan before the American forces surrendered.

Today, the park stands in mute testimony of not only the brave men of Company C, but to all those who have served, and those who have died, in the defense of our country.

The archway at the entrance to the park now says Veterans Park, and the POW-MIA, United States and Ohio flags fly proudly behind it. A lovingly restored World War II M5 anti-tank gun guards the entrance.

There are visual testimonials to the military services throughout. The red cobblestone walkway leads visitors on a journey past a bronze statue of a pair of empty combat boots and a helmet resting upon a rifle. A plaque says, in part, that it is dedicated to “all the men and women of Port Clinton . . . who paid the ultimate sacrifice.”

A beautiful brick raised-bed garden in the shape of a 5–sided star, has brass plaques honoring the Navy, Army, Air Force, Marine Corps and the Coast Guard at each of its points. In the center of the raised bed is an eternal flame. A M-42 “Duster” tank stands guard over the north side of this hollowed ground.

The park, located at 115 Monroe Street and West 2nd Street, is maintained by American Legion Post 113, and is beautifully landscaped. Many of the red bricks in the walkway bear the names of the men and women who have served their country. Black wrought iron benches provide a place to sit, to read, to contemplate, to remember. It is a perfect spot to spend some quiet time.