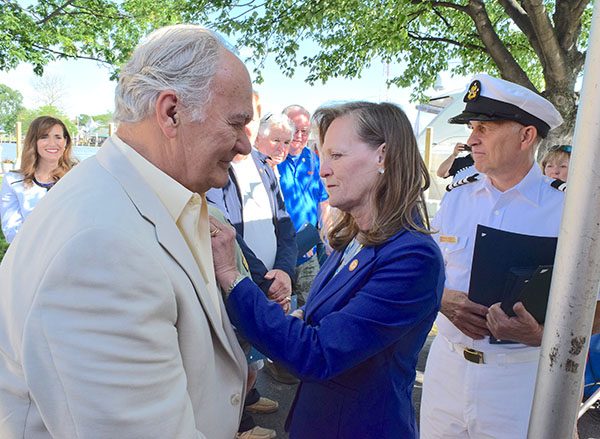 Retired Major General Debbie Ashenhurst of the Ohio Department of Veterans Services awards a special Vietnam War 50th Commemoration Pin to a veteran during a Flag Day Recognition Event on June 14 at the Port Clinton Yacht Club. Helping with the presentation is veteran Mike Hablitzel. A PCYC commodore, Hablitzel also received the special pin, as did his his father, 100-year-old Darrell Hablitzel, and brother, Mark Hablitzel. (Photo by D’Arcy Egan) 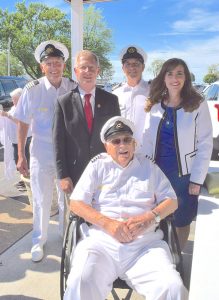 The large group of veterans who were honored included all Vietnam-era military service members who were on active duty between Nov. 1, 1955 and May 15, 1975, regardless of where they serviced.

The United States of America Vietnam War Commemoration was established in the 2008 National Defense Authorization Act to thank and honor veterans of the Vietnam War, highlight their service and pay tribute to their contributions. It started with a presidential event at the national Vietnam Veterans Memorial on May 28, 2012, and will run through Veterans Day, Nov. 11, 2025.

The front of the lapel pin awarded to the veterans displayed an eagle positioned in front of an American flag, and surrounded by a blue laurel wreath. The back of the pin contains the message: “A Grateful National Thanks and Honors You.”