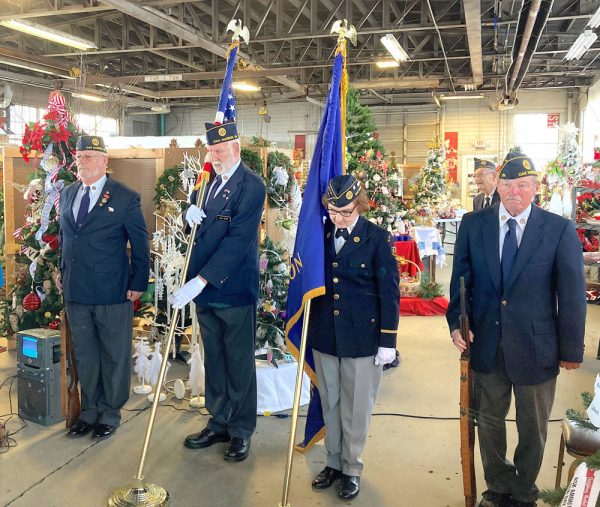 Members of the Oak Harbor American Legion pause in the presentation of the flag as the National Anthem is sung.

A Vietnam Veterans Pinning Ceremony took place at The Arts Garage (TAG) in Port Clinton last week, a part of the the United States of America Vietnam War 50-year Commemoration. The ceremonies are part of a growing effort to honor all Vietnam-era military service members nationwide.

Members of the military serving from Aug. 5, 1964 to May 7, 1975 are considered part of the group designated as Vietnam Veterans.

The central focus of the ceremonies is the presentation of ceremonial pins to veterans as a symbol of gratitude for their service to our country. The back of the pin is engraved with the message, “A Grateful Nation Thanks and Honors You.” 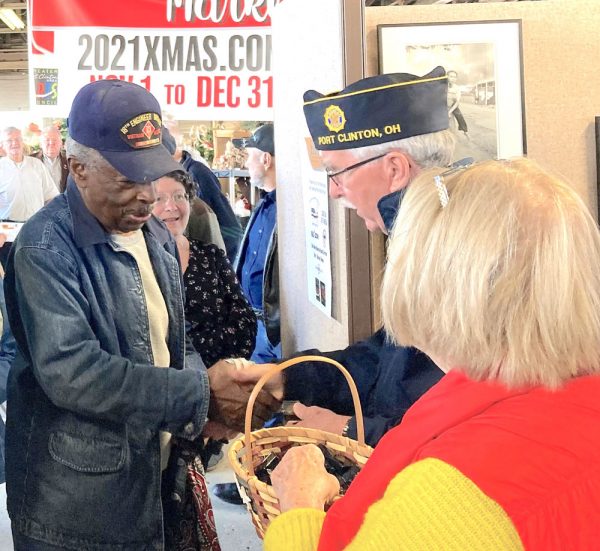 A Vietnam Veteran is honored with his pin and a shake of his hand. (Photos by Phil Wheeler)

Sara Toris, Director of the Ottawa County Veteran’s Service Office, noted that “those who served stateside, or anywhere in the world during the war, were there supporting the troops that served in Vietnam. I don’t know that the troops serving there could have done everything that they needed to do without that support.”

The event at TAG was overflowing with well-wishers. More then 67 Vietnam vets sent RSVPs, and over a 100 vets, family, and friends were present to applaud and thank them for their sacrifice. A color guard from the Oak Harbor American Legion presented the American flag, and the acappella group ‘A Touch of Class’ from Port Clinton High School did a wonderful rendition of our National Anthem. 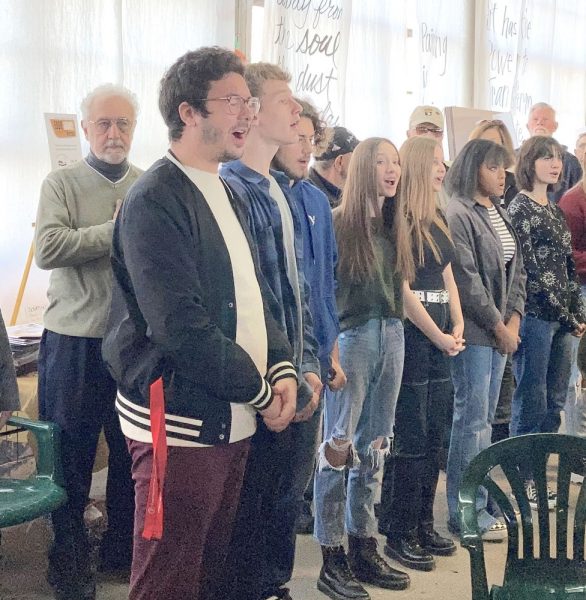 It was a joyous, yet somber, event designed to honor and welcome home the veterans, as well as remember the past. There were wheelchairs, walkers and canes in abundance. Bald and graying heads were the rule. Yet, for an hour or so, all of us veterans were in our 20s again. Our backs were straight, our stomachs flat, and our hair was dark. We stood among friends and family who welcomed us with open arms.

It has almost become a cliché to say “Thank you for your service.”

TAG board member Barbara Radebaugh said a better headline would be “Welcome Home.”