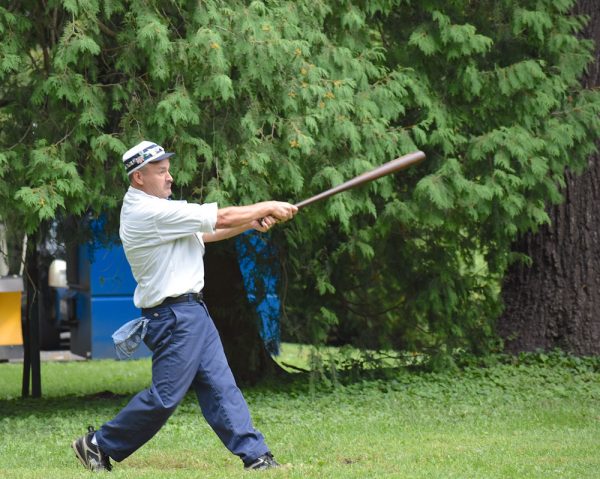 Jonathan Franks, captain of the Spiegel Grove Squires, gets a hit during a game in 2019. The Squires are the host team for the State of Eight Presidents’ Cup vintage base ball tournament, which is Saturday, July 31, and Sunday, Aug. 1, at Spiegel Grove and Naderer Field in Fremont.

Vintage base ball teams across Ohio are coming to Fremont to compete in the State of Eight Presidents’ Cup vintage base ball tournament on Saturday, July 31, and Sunday, Aug. 1, at fields in Fremont.

The tournament, which brings together teams representing the regions from where each of Ohio’s eight presidents originate, is being played in honor of Sandusky County’s bicentennial. It will take place at Spiegel Grove, the grounds of the Hayes Presidential Library & Museums, and at Naderer Field, 206 Sullivan Rd., Fremont. All games played on Sunday, Aug. 1, will take place at Spiegel Grove only.

The tournament schedule has been modified to allow for a double-elimination tournament. The schedule is specified below.

Admission is free. Attendees are asked to bring a chair or blanket for seating at both fields. Concessions will be offered at Spiegel Grove. The Sandusky County Bicentennial traveling museum also will be at Spiegel Grove throughout the tournament and open to visitors.

The tournament will follow the rules of base ball in the 1860s, when it was first becoming an organized sport and spelled with two words. Players are called ballists, and they wear period-style uniforms and adopt the language of 19th-century base ball during their matches, as games were called during the 1860s.

Due to the tournament being short one club, the Squires will represent Garfield in addition to Hayes. Garfield and Hayes were political allies. The bracket can be found online at: https://www.rbhayes.org/news/2021/07/14/general/vintage-base-ball-tournament-celebrates-sandusky-county-s-bicentennial/

The schedule, following the bracket:

The Spiegel Grove Squires are sponsored by Wright Leather Works.