Virgil’ getting ready to go up in flames!

Can “Virgil,” this year’s Burning Snowman, give Old Man Winter the boot on Saturday, Feb. 23 with a fiery display – and plenty of music – on the Port Clinton beach?

It really doesn’t matter, because everyone is preparing for the 5th annual music concert that has become the biggest party of the winter. The bands will be ready to go at Docks Beach House and Mr. Ed’s Bar & Grill for an evening of dancing, good eats and a few beverages.

“The gates will be open at 3 p.m., with the music kicking off at 4 p.m.,” said Burning Snowman creator Lenny Kromer of Castalia. “I expect Virgil will be torched some time after 7 p.m. We’ve made a few changes to make sure there won’t be any safety issues if we have windy weather again.”

Kromer has the naming rights for the Burning Snowman, and chose “Virgil” for the 5th annual Burning Snowman Festival. Last year it was “Floyd” who went up in flames, and needed to be doused a little early because the brisk winds scattered Floyd’s ashes far and wide.

Kromer and the festival committee are just delighted that the Port Clinton Drawbridge, which was under repair last year for the Burning Snowman Festival and caused major detours, is going to make it much easier to get to the winter pageant.

“It should be much smoother,” said Kromer. “We’ve added some shuttles for convenience. Parking is still limited at the festival, so it will be easier to catch a shuttle from one of our many Flame Sponsors.

Corduroy Road will open the concert at Docks Beach House at 4 p.m., followed by Master TC & The Visitors at 6 p.m., who will return after the burn. Across W. Lakeshore Boulevard at Mr. Ed’s Bar & Grill, The Junk will be followed by The Eric Sowers Band. 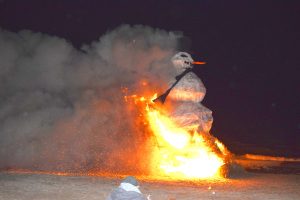 The big, bad, 30-foot tall “Floyd” was the center of attention at the Burning Snowman Festival on the Lake Erie shoreline in 2018, even though big winds whipped the Port Clinton beach and gave Chief Kent Johnson and the Port Clinton Fire Department fits. Festival officials report a few changes have been made to help make sure there are no flaming issues on Saturday, Feb. 23.