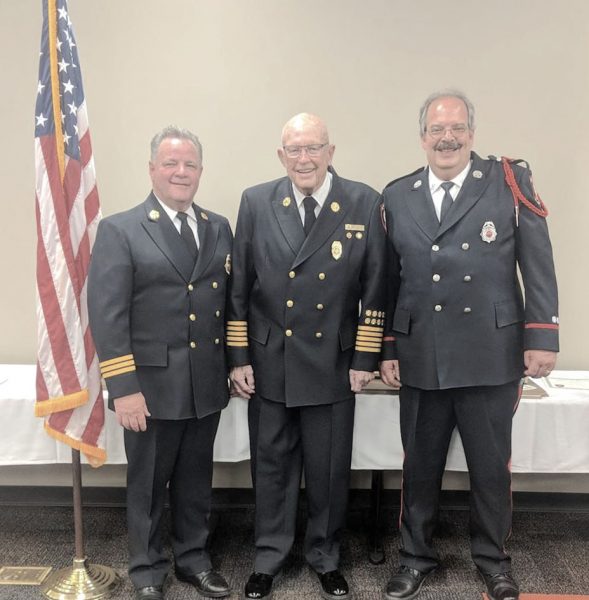 Recruiting volunteer firemen is difficult in these changing times, though, because of the nature of the beast, said Stahl.

“Fewer Ohioans are choosing to become volunteer firefighters because of the major investments of time and commitment have increased over the years,” said Stahl. “To become one of the Band of Brothers at the fire station is a great way to support a community, but volunteer firemen and their families must both make some sacrifices,” said Stahl.

Some suggest the answer is a paid, full-time fire department.

“That’s costly for many rural fire departments, and considered beyond the financial reach of most residents of small towns and villages,” said Stahl, who points out that volunteer fireman have to go through a lot of training, and maintain certifications with continuing education, a daunting task.

Volunteer firemen have a great camaraderie at the fire station and while fighting a fire, but with the huge increase in emergency calls, they’re putting in much longer hours,” said Stahl. “We’re a close family, and we’re dedicated. We’ll honor one of our own this summer, Lowell Hartman, 86, who has been a volunteer fireman for 65 years.”

Hartman was well aware of the trials and tribulations of becoming a volunteer fireman when he signed on 65 years ago.

“My father was a member of the Oregon fire department, as well, when I was growing up,” said Hartman. “But times change. More kids are playing sports after school. Wives often work outside the home now, and need a husband to be at home for the kids.”

The Williston fire station was once known as Hartman’s Department,” said Hartman, with his father, Dennis Hartman, the Williston chief, and his grandson, Chad Harmon, a medic in Perrysburg.

The Williston fireman’s group used to have a Service Banquet, and even that has changed.

“Our wives used to cook everything for our annual Feather Party fundraiser and our yearly banquet. Nowadays we make a party that’s fun for the wives. It’s catered and first class,” said Hartman.

The fire chief for a decade, Hartman had made fire house friends all over Northwest Ohio after becoming a volunteer fireman in 1957.

“In Williston, we had 35 or 40 members, and all of Williston would be alerted of a fire by a big siren in town,” said Hartman, with a laugh.“When the fire bell sounded in our small town, we’d all run after it, trying to get to the fire and watch as he firemen put it out.”

Funeral directors transported all of the accident victims back in the early 60s and 70s, and then the volunteer firemen took over.

“We made 20 or 30 runs a year back in those days. Now our firemen handle about 450 runs a year, as the population increased,” he said. “Nowadays, emergency runs are about 90% of what we do. Every time we take the truck out, it’s a good hour before we’re back at the station house.

In the early days, businesses didn’t dock a firemen’s pay if they were out on a call.

“That doesn’t happen much these days,” said Hartman.

“As a career firefighter, I know the fire service is rooted deep in tradition, but the challenges of today can only be addressed through forward-thinking, innovative solutions. There is no single greatest issue of concern, for the volunteer firefighter service there are many – and together, they are creating challenges never before seen,” said State Fire Marshal Kevin Reardon. “This is not only an Ohio issue, this is a national problem, but Ohio can and will serve as an example.”