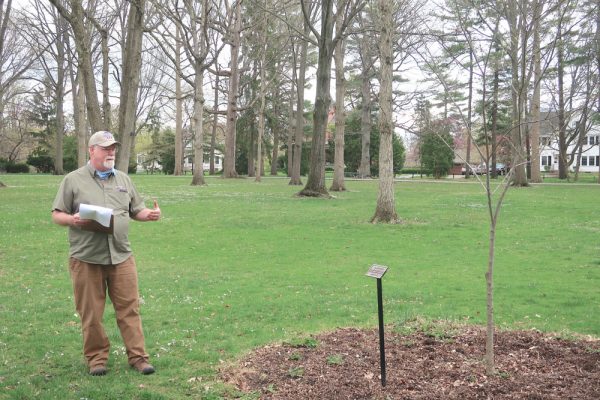 When President Grover Cleveland came to Spiegel Grove for President Rutherford B. Hayes’ funeral, the horses pulling his carriage became rattled and upset.

Cleveland stepped out of his carriage and leaned up against a hickory tree while waiting for the horses to calm themselves.

Years later, the Hayes family named that same hickory tree, located near the Hayes Home verandah, in honor of Cleveland.

During President William Howard Taft’s visit to Spiegel Grove to visit Col. Webb Cook Hayes, son of Rutherford and First Lady Lucy Hayes, he noticed a large tree near the verandah and walked over to look more closely at it.

“This one’s big enough to be mine,” the rotund Taft said.

Webb named that tree for Taft.

These are some of the stories behind the more than 1,700 trees at Spiegel Grove that John Havens has uncovered while tagging and cataloging the trees for Hayes Presidential.

Havens, a member of the Hayes Presidential Board of Trustees and Buildings and Grounds Committee, has volunteered his time for the past year on the project. He has tagged about 400 of the trees with a number, which allows the site to catalog each tree and any issues or unusual and interesting attributes.

“I find it really enjoyable,” Havens said. “I enjoy history, so it’s always fun reading back on the Hayes’ history. It’s fun when I’m working here and people ask me what I’m doing.”

Havens has an associate’s degree in nursery management from The Ohio State University Agricultural Technical Institute. He hasn’t used it for many years because he owns a paint store and serves as a local township trustee.

He uses records from when the trees were last cataloged at least 20 years ago and must identify each tree. Some that were cataloged back then have since died or blown over in storms, and new ones have been planted.

His work is especially important because Hayes Presidential was designated an official arboretum last year by the Arbnet, an organization that designates and accredits arboreta. He is helping staff and volunteers work on a master plan for the property and its trees and plants.

There’s the willow tree down the hill that came from a cut of a willow on the island of Elba where Napoleon lived in exile.

There’s the George Washington tulip poplar that was planted here in 1984. It was a seedling from the original at Washington’s estate of Mount Vernon in Virginia.

There are the Reunion Oaks, so named because President Hayes’ regiment came to Spiegel Grove for a reunion and camped beneath them in 1877. These, which include the Bicentennial Oak, stand near the back of the home.

Using his knowledge, Havens has developed a tree tour that Hayes Presidential is offering to visitors this Friday, April 30, which is Arbor Day, and Saturday, May 1. He also is working with the Sandusky County Convention & Visitors Bureau to offer this experience to bus tours.