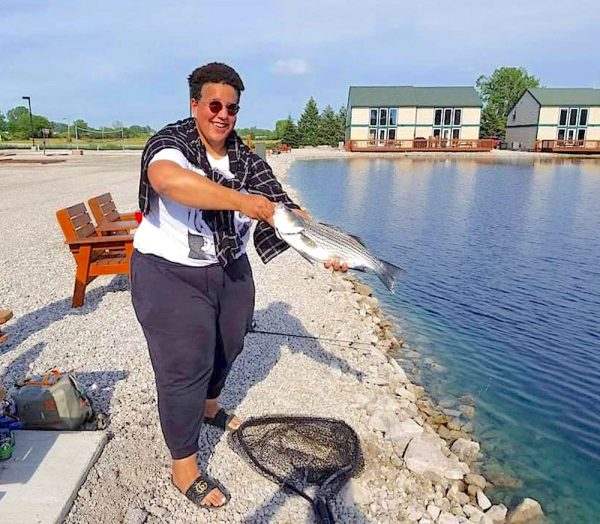 Grammy singing star Brittany Howard was in Port Clinton to try her hand at walleye fishing aboard Mark I Charters. The Nashville, Tenn. angler caught a trophy striped bass, as well, from the fishing pond at Bay’s Edge Condominiums.

The winds that we had over Memorial Day weekend made fishing West of the islands difficult. There have been good days of fishing at C Can and up at the border, but for the most part going West has been very inconsistent.

What has been a surprise this week, however, have been a solid report that some nice yellow perch being caught around the Coal Dock area on Sandusky Bay.

For walleye fishing, though, the most reliable area to go to has been five to eight miles off Kelleys Island. We only drifted in the wind and current and cast lures on Tuesday, but we still managed to put a five-man limit in the cooler by 1 p.m. We have been moving around a lot this week because the walleye are constantly moving around.

Casting success, as it has been all year so far, remains at a five to 12 count down for weight-forward lures and small single blade spinner rigs. For the most part we are using half of a nightcrawler and a 1-ounce lead egg sinker, and while spinner blade colors have fluctuated, gold is the standard.

I know it sounds like an excuse, but the wind has been a big factor for fishing success in June.

As far as the trollers go, they are utilizing the same areas as casters, which is five to eight miles East of Kelleys Island. Charter captains have been using more worms than they have in the past. One of our hottest baits have been “worm burners.”

This is a spoon with a single hook with a short leader and worm harness behind it. We use these behind Tru-Trip diving planers set at 35 to 45 feet back. The best speeds have been between 1.9-2.1 miles per hour.

This weeks report is a short one since we have been moving all over due to the unpredictable weather we have had. As always, have fun, be safe and get out there and enjoy the lake. Keep a tight line!