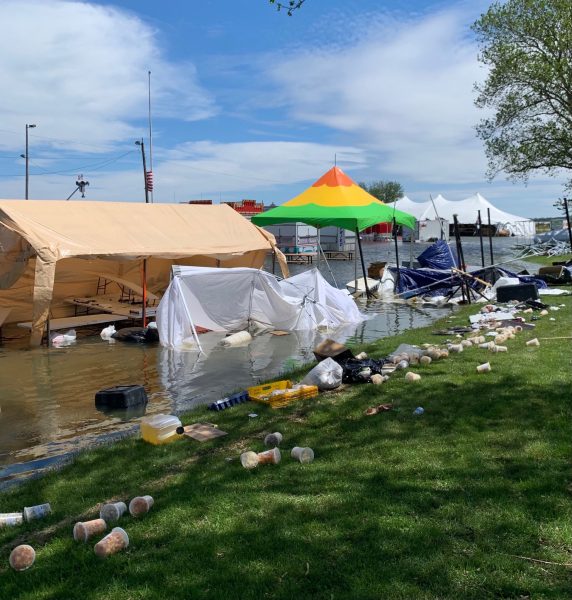 The potent nor’easter that pounded Port Clinton and the Marblehead Peninsula on Thursday and Friday, making a mess of Waterworks Park and shutting down the Walleye Festival scheduled there during the Memorial Day Holiday.

The gale force winds didn’t drown all hopes, though.

Sponsor Main Street Port Clinton and the City of Port Clinton decided on Saturday morning to trim a day from the schedule and host a slimmer, trimmer four-day Walleye Festival on Thursday through Sunday, June 3-6.

Durant Amusements had already decided last week to keep its carnival rides in operation at Waterworks Park on Thursday through Sunday, June 4-6. How many exhibitors will stick around for what President Nicole Kochensparger of Main Street Port Clinton called “Walleye Festival – Part 2” remains to be seen.

Many exhibitors were still trying to rescue their equipment and merchandise on Saturday and assess the damages.

City workers were still pumping Lake Erie water from the grounds of Waterworks Park on Saturday and Sunday, with submerged electrical lines a hazard for vendors. It also kept volunteer cleanup crews from entering the grounds.

The Music on Madison and Walleye Festival bands had all been sidelined. Port Clinton Mayor Mike Snider said that Sunday performances on downtown’s Madison Street would be live at 3 p.m. and 8 p.m. All of the roadways around Port Clinton — including five that had been closed by the Ohio Department of Transportation, are now open.

The Miller Ferry and the Jet Express are both back in business after cancelling trips to the Lake Erie islands on Friday. Miller Ferry reported a rush of holiday traffic to Put-in-Bay on Saturday when ferry trips resumed at about noon.