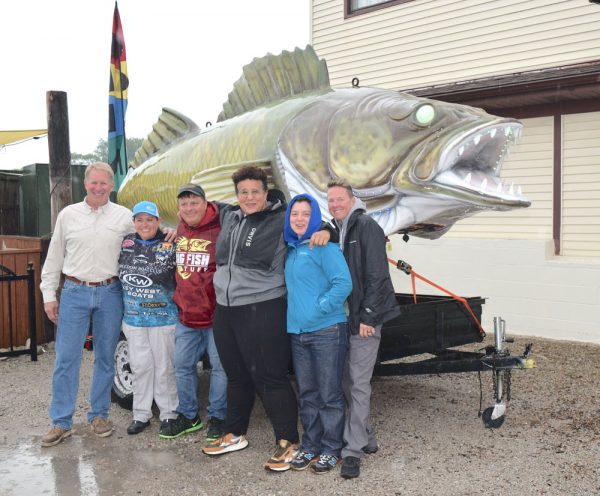 “I love to fish, but I’d never even seen a walleye before,” said singing star Brittany Howard, showing off a trademark smile. “This was one of the most fun days I’ve ever had.”

Howard is known in musical circles everywhere after winning the Grammy for Best Rock Song in March for “Stay High.” It was her fifth Grammy, scoring four times as lead singer with Alabama Shakes.

Howard couldn’t wait to fish Lake Erie with her friends from Nashville, Tenn. They were out on Lake Erie with Port Clinton’s Capt. Mark Cahlik and Mark I Charters to film a walleye adventure for Midwest Outdoors TV.

At a post-shoot party held by Don Clemons at the Bait House River Bar on the Portage River in downtown Port Clinton, Leppel was delighted with the fishing and filming success.

“Brittany Howard caught the first walleye, and her fishing ability is simply awesome,” said Leppell. “She handled spinning tackle like an expert, and the women listened and learned walleye techniques quickly. They had little trouble catching a very nice bunch of walleye.”

Howard was a gracious guest at Clemons’ popular bar. She posed for plenty of photos, including one with Wylie the Walleye, who Clemons and his committee drop every midnight on New Year’s Eve.

The party continued at Crow’s Nest in Marblehead, and Cahlik said the hospitality of owners Marla and John Skweres impressed the visitors.

Cahlik owns the Bay’s Edge complex in Port Clinton, which offers luxury accomodations, fish cleaning facility and a tackle shop, as well a fleet of a half-dozen charters boats.

Cahlik has a well-stocked fishing pond at his complex at 5359 E. Bayshore Rd., Port Clinton, and Howard and friends tested the small waters available to Bay’s Edge guests. She caught and released a 7-pound striped bass and a 5-pound largemouth bass, reported Cahlik.

“I grew up in Athens, Ala. and began fishing for bream and catfish when I was about four years old,” said Howard. She learned to write poetry and play piano from her older sister, Jaime, who she named an wildly successful record album after a couple of years ago.

“I started playing guitar at 13, and always liked 1970s rock, like Black Sabbath and Pink Floyd,” she said. She started getting into classic rock, and soon after high school she was well on her way to becoming a full-time musician as lead singer of Alabama Shake.

“Everyone had a great time. Howard and her friends enjoyed the walleye fishing and hospitality of Port Clinton so much that we’re already making plans to fish and film with Midwest Outdoors TV on Lake Erie next year,” said Cahlik.