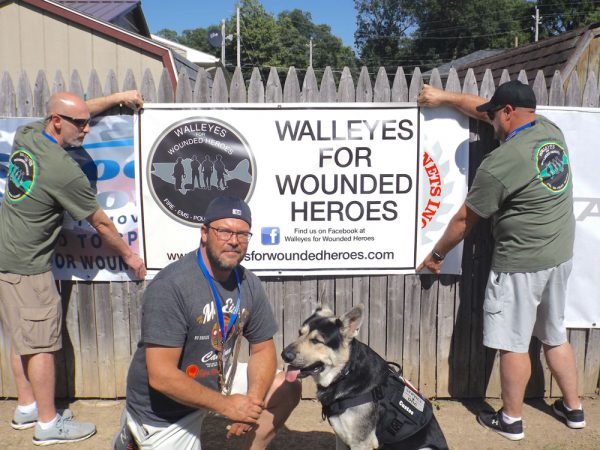 Eddie Richardson, Executive Director of The Wounded Blue organization, and his service dog Custos help set up the Walleye for Wounded Heroes camp at Little Ted’s Cottages in Marblehead.

STORY AND PHOTOS BY PHIL WHEELER

The Walleyes for Wounded Heroes organization was back in Port Clinton after a year off due to the Covid-19 pandemic. About 100 “Heroes” and more than 30 volunteers descended on Little Ted’s Cottage’s on the Lake Erie shoreline in Marblehead to share fish stories, catch some walleye and, most importantly, share in the healing process with friendship and fellowship.

Whether it’s from physical trauma or emotional distress, this not-for-profit organization provides support for “Heroes” from the military, first responders, and Gold Star family members. Men and women recovering from severe traumas can come together in a safe environment, swap stories and try to heal.

“Silent Bob,” a Marine who was Vietnam veteran, made the trip two years ago for his first event and barely spoke. A newsman from a Cleveland television station tried to engage him while on the water while walleye fishing, but Bob would just turn away.

The poor news guy started getting sea sick, and Bob started talking to him. But only while the news reporter was hanging over the side. This year, “Silent Bob” talked a little to his fellow veterans. 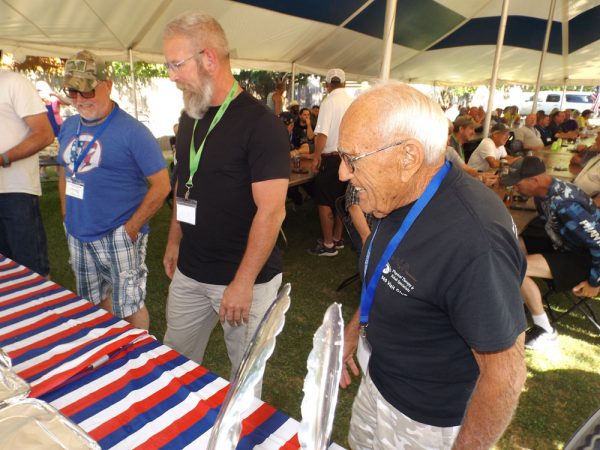 Harold McMahon, a 96-year old WWII veteran, stands in the chow line with friends to enjoy a dinner of freshly-caught Lake Erie walleye.

Story after story can be told about these brave men and women and their battle with Post-Traumatic Stress Disorder (PTSD), severe brain injuries, and horrible physical injuries. They are called “Heroes” because they were injured protecting us. Whether it is a police officer hit by a car during a pursuit of a bad guy, or a soldier devastated by an Improvised Explosive Device (IED) in a far away country, they have put their life and well-being on the line to serve and protect us.

And they have paid a heavy price for it.

Eddy Richardson is a retired policeman injured during a foot pursuit of a felon. He was hit by the felon’s car and sent flying over 20 feet, suffering traumatic brain damage.

Richardson and his service dog, Custos, were in attendance for the third year. Custos is an “Old World” German Shepard, meaning he is big, at over 100 pounds, and still growing. Custos is Latin for “Guardian” and is the unofficial mascot for the event, bringing smiles to the faces of everyone who crosses his path.

Richardson, the Executive Director of The Wounded Blue, another support organization, works closely with Walleyes for Wounded Heroes. After his traumatic brain injury, he found that there was a lack of support and understanding for those injured in the line of duty.

“In the military, or the police, we were trained to resolve the threat. Sometimes, that threat becomes ourselves. The physical and emotional pain can become a threat, and we will seek to eliminate that threat, whether through alcohol, drugs, or suicide. 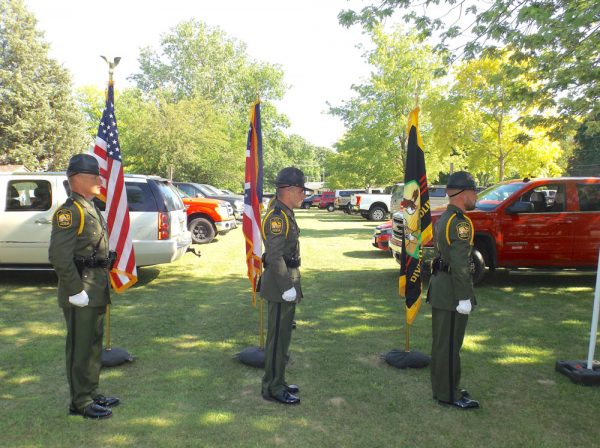 Members of the Ohio Division of Wildlife provided their annual Honor Guard presentation for the Walleye for Wounded Heroes event. From left to right in the foreground are Officers Josh Shields, Bob Nelson and Aaron Brown.

“Organizations like Walleyes for Wounded Heroes are helping us deal with that pain,” said Richardson.

“He was 23, and in his first deployment,” said Morrison. “He was killed by an IED.” Morrison has since joined Wounded Heroes as a volunteer in remembrance of her son.

Fred Lohman, the president of Walleyes for Wounded Heroes, said the organization was founded back in 2012 by Joe Stelzer and Joe Hein.

“They were on a fishing site that was asking to take some wounded veterans fishing,” said Lohman, “They reached out, and the first year they hosted 19 guys. Every year since, we have brought up a few more.”

This year, they have 92 veterans staying at Little Ted’s Cottages in Marblehead and more coming over from the Ohio Veterans Home in Sandusky.

Many who are returnees talked about “The Healing Waters of Lake Erie.”

Local businesses supporting the event include Mutach’s Food Market and Hi-way Bait & and Tackle, both in Marblehead. Gill Construction and Bassett’s in Port Clinton provided supplies, while Ala Carte donated breakfast and lunch. Routh Packing Company in Sandusky and local Huntington Bank employees chipped in, and the American Legion National Organization donated a large grant for help with lodging. Many local charter captains and individual boat owners provided the walleye fishing boats at no cost.

To provide funding or assistance at future events, contact Ferd Lohman at Ferdlohman@Gmail.com, or Dale Lybarger at Williodaledale@Gmail.com.